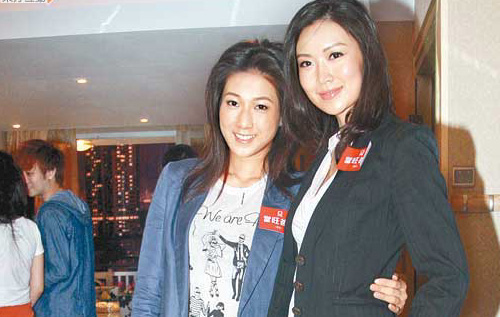 Yesterday, Linda Chung (鍾嘉欣), Steven Ma (馬浚偉), Ha Yu (夏雨) and the rest of the cast and crew held a praying ceremony for new TVB drama, Lucky Father <當旺爸爸>. Earlier on, when Linda and Steven were shooting an accident scene for Lucky Father, a passerby thought that an actual accident had occurred and called the police. When mentioned, Linda replied that she felt that the accident scene was probably too realistic, thus misleading people to think that it was real. Linda expressed that she was shocked when the police suddenly arrived at the scene on that fateful day.

Linda will have romantic developments with three men in the drama and they include Steven Ma, Lai Lok Yi (黎諾懿) and Edwin Siu (蕭正楠). Will she have kissing scenes with all of them ? Linda responded, “Fathers are the main topic of this warm-hearted drama. As romantic love isn’t the primarily focus here, no kissing scenes will likely be imposed. It was rather challenging as this is the first time I’m acting as a policewoman. As I often have to film criminal-chasing scenes, I suffered from a lack of sleep but still had to film from morning until night the very day, running until my legs were numb and in pain.”

Did Linda prefer filming kissing scenes or criminal chasing scenes? Linda laughed and said, “It’s most important for the effect to be good. All three of them are good men.” (Reporter: Which one of them fits your criteria of a boyfriend?) “Each of them have their own strengths. I have the most chemistry with Steven Ma since we have collaborated five times now. Lai Lok Yi is my good friend. Edwin Siu is a nice guy. However, I will not develop with any of them. Acting is purely acting; I keep private life separate from work.”

In other news, Tracy Ip (葉翠翠) was rumored to have turned down TVB actor, Benjamin Yuen’s (韋家雄) pursuit of love. In reply to this, Tracy silently admitted to it, “We previously filmed 4 In Love together and in that drama, his character really likes me. During filming, he was just going into character. After filming, nothing happened between us. We didn’t communicate or even went on any date after that.” Tracy Ip clarified that she did not mind dating shorter guys than herself but preferred that her boyfriend was not from the entertainment circle.