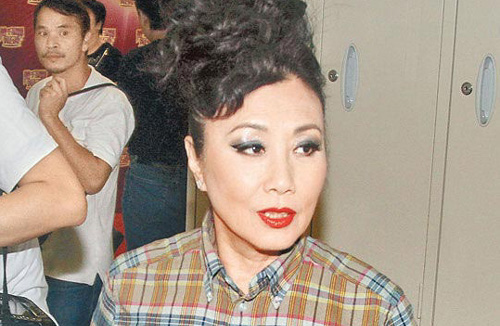 As “TVB’s Top Treasure,” Liza Wang (汪明荃) defended TVB’s strengths and challenged the qualifications of new rival television station, City Telecom (CTI). The day before, CTI held a ground breaking ceremony to mark the construction of their production facilities. Liza stated, “CTI is a new company with nothing. Let’s produce some results before we discuss further! There is no need to talk about anything right now! TVB has come a long way and will not be brought down through slander!”

Liza continued, “Despite ATV’s long existence, they could not garner ratings! It is understandable that a new television station needs to recruit staff. I wish CTI well! Ricky Wong (王維基) said that there will be new dramas released at the end of the year. I want to see what kind of dramas they will be!”

TVB’s biological artists, Bosco Wong (黄宗泽), Kate Tsui (徐子珊), and Michael Tse (谢天华) strongly supported their maternal home. Indicating that he found his first job at TVB, Bosco  said, “I grew up drinking TVB’s milk and have served TVB for over a decade! As a TVB artist, I feel absolute attention and respect from outside parties. There are numerous benefits, such as higher appearance fees for TVB artists! TVB’s reputation is quite renown! Last year, Myolie Wu (胡杏儿) and I filmed a mainland drama together; we have a high degree of freedom as well, with numerous opportunities!”

Kate Tsui stated, “From the point of no one knowing who I am, to entering the Miss Hong Kong Pageant, and to having numerous fans, these are all things which TVB bestowed upon me. I even had the ability to film movies! In fact, TVB artists have a lot of freedom!”

Michael Tse noted that without TVB casting him in E.U. <学警狙击> and Lives of Omission <潜行狙击>, his popularity would not have reached its current level.

Regarding Ricky Wong’s ground breaking ceremony held inTVB’s Tseung Kwan O district, Virginia Lok (乐易玲) said sarcastically, “The stakeholders in the entertainment industry can flourish together and there is no need to reveal each others’ scars! The audience wishes to see good shows and not this (exposure of scars)! I congratulate him upon his ground breaking. I have a message for the cast and crew members: Without crossing the pond, the fish will not get fat; without competition, it will not get popular. I truly hope that they can get ‘fat’! I was especially happy to see Yue Mo Lin (余慕莲) sign with CTI and still have opportunities with her advanced age!”

Asked whether TVB would accept staff who left the company and decided to return, Ms. Lok said, “The world is round. We have the disposition of a large station and the heart for tolerance!”

Jayne: Ms. Lok was quite rude in what she said about Yue Mo Lin, who worked for TVB for 40 years and allegedly did not leave TVB on good terms.