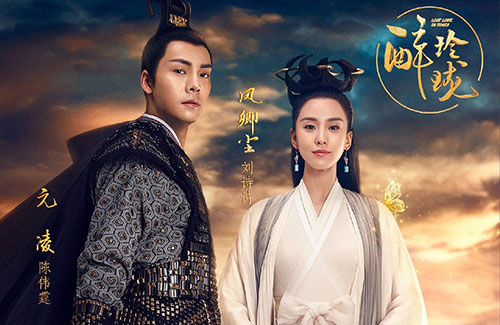 Chinese fantasy television drama Lost Love in Times <醉玲珑> is an adaptation of the popular fantasy novel Drunken Exquisiteness, but not really. Other than the characters and the time-travel theme, not much of the original story was kept for the TV show.

Drunken Exquisiteness, written by Chinese American writer Fourteen Nights (十四夜), tells the story of a present-day woman who travels back in time to the Western Wei Kingdom in the mid-500’s, and falls in love with a prince.

The backbone of the story is quite similar to Tong Hua’s (桐华) time-traveling epic Bu Bu Jing Xin <步步惊心>, which was adapted into the uber-successful television drama Scarlet Heart in 2011. The popularity of the show was one of the reasons that reinforced China’s decision to put a ban on studios in making time-traveling television shows and movies. Authorities felt the genre’s popularity was going too far, and that its distortion of facts was disrespectful to China’s rich history.

Lost Love in Times, however, managed to pass through all the restrictions.

To avoid the ban, the new TV show, which stars Cecilia Liu Shishi (刘诗诗) as the sorceress Feng Qingchen and William Chan (陳偉霆) as the fourth prince Yuan Ling, altered the time-traveling aspect of the show so it would not have to change major events in real history. As a result, not much of the original story of Drunken Exquisiteness was kept. The show’s fantasy setting also sets it apart from other “historical” dramas, suspending belief.

Lost Love in Times follows the sorceress and master healer Feng Qingchen on a journey where she consistently rewinds time to help Prince Yuan Ling ascend to the throne of Western Wei. She uses this skill to prevent Yuan Ling’s brothers from taking the throne, changing history over and over again.

From falling in love with a prince, to the prince fighting the throne from his brothers, the new story is actually quite similar to Scarlet Heart, which Cecilia also starred in. But while Scarlet Heart had a more realistic approach with the story, Lost Love in Times takes the responsibility of crafting a political world in a fantasy setting.