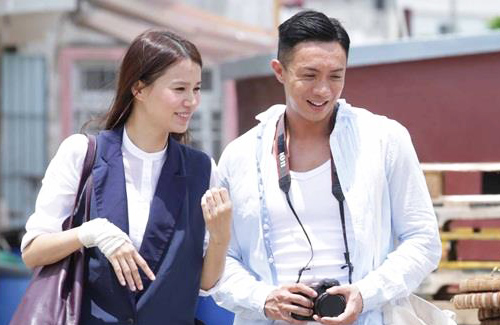 With a completely revamped cast including Louis Cheung (張繼聰) and Priscilla Wong (黃翠如), Come Home Love <愛•回家> is suffering a ratings crisis, as the ratings nosedived from 25 points to 21 points. This is in stark contrast with the series’ ratings prior to the cast changes, which had peaked at an impressive 38 points.

Priscilla has also been fiercely criticzed by viewers for bad acting. This has sparked rumors that TVB has given the producers an ultimatum: if the ratings do not improve, the sitcom will be culled by the coming Lunar New Year.

In response to the poor ratings, the production team contemplated inviting the original cast to rejoin the sitcom, but this did not work out as the previous stars are all tied up in other projects. While Angel Chiang (蔣家旻) will finish filming Police Dog Brother <警犬巴打> in late September, Tsui Wing (徐榮) will only be done with filming Brother’s Keeper II <巨輪II> in January 2016. Tsui Wing expressed optimism regarding the ratings and said, “Perhaps once the audience becomes used to the new cast, the ratings will pick up.” As for Lai Lok Yi (黎諾懿), arguably one of the most popular members of the previous cast of Come Home Love, he has just started filming Purely An Accident” <純熟意外> and will possibly be done in October.

Apart from Priscilla’s lackluster acting, other factors for the series’ poor ratings include Louis’ character being increasingly more unlikable as the show progresses, and the fact that the characters respectively played by Louis and Priscilla have pre-maturely resolved their romantic tension and are already together, leaving the audience with little suspense.

The producers recently clarified that Louis and Priscilla will not actually feature permanently in the cast for Come Home Love and will leave the show in about two months. Executive Producer, Luo Zhen Yue (羅鎮岳) said, “Their characters will break up due to differences in their views regarding marriage, and they will both leave Hong Kong to go on separate journeys of self-discovery.”

On rumors that the previous cast has been invited to rejoin the show, Zhen Yue admitted, “Yes, but they are all unavailable right now. However, if their schedules permit, and if it fits the storyline, we will consider having them back.”

Louis also confirmed that the original plan was for him and Priscilla to only be with the show for two months. He said, “I will be involved in a film production in Mainland China next month, and TVB knew this from the start when they asked me to act in Come Home Love. TVB was very understanding, and so our arrangement was that I would be in Come Home Love for about two months. This is the same arrangement for Priscilla.”

When pressed for his thoughts on the poor ratings, Louis said, “I thought the average of 21 and 22 points was not bad. I guess it needs time to pick up. After all, the audience still feels attached to the Ma family.” He then expressed that he had not heard of the rumors that the show was under the threat of being culled.

Louis added that he did not think he had to worry about ratings as an actor, as poor ratings may be caused by multiple factors. He said, “As long as I have worked hard, I don’t give myself additional stress. I really enjoy filming for Come Home Love.”