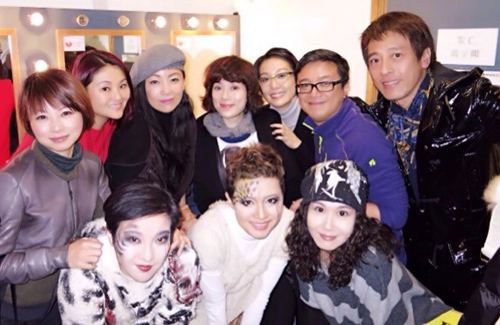 Starring Mimi Lo (羅敏莊) and Alice Lau (劉雅麗), the original Hong Kong theater musical DOGs debuted its first show at the Jockey Club Auditorium, the Hong Kong Polytechnic University’s classical theater on February 14. Based on a true story, DOGs takes place in modern-day Bangkok, and chronicles the adventures of Wanna, the pet dog of Thailand’s prime minister. She meets seven other dogs – all with backgrounds much different from her own – and ends up in an experimental workshop for animals.

Portraying dogs, Alice revealed that the cast is involved in many dangerous stunts in the musical. She disclosed, “Mimi injured her tailbone once.” Mimi quickly clarified, “There’s a lot of climbing over objects in this musical. I should be doing that twenty years ago, not now. I’m too old now!”

Many of Mimi and Alice’s celebrity friends attended the premiere show yesterday to support the cast, including Mimi’s husband Power Chan (陳國邦),  Sheren Tang (鄧萃雯), Maggie Cheung Ho Yee (張可頤), and Elena Kong (江美儀). On why the Beauty Knows No Pain <女人最痛> costars decided to go out on a date with others on Valentine’s Day instead of with their significant others, Maggie, who is single, said, “I’m here to support Mimi and Alice. I also stole [Elena] from her boyfriend so she can be my date for the night.”

Asked if her boyfriend was unhappy with the arrangements, Elena said, “My boyfriend’s actually not in Hong Kong right now.” She added, “I’ve broken up with him for today.”

Maggie, who has recently been sharing many photos of her hiking trips on Weibo, revealed that many of her hiking partners were younger colleagues. Asked if she was looking into starting a relationship with one of them, Elena butted in, “Younger men? That’s the trend now!” Maggie added, “I’m actually not really into good-looking men. As for having a younger partner, I can see myself with one as long as our souls are close and compatible,” she added with a laugh. She then jokingly admitted that she has a pursuer and that they are in a “developing” relationship.

After the premiere February 14 showing, DOGs will continue its run throughout the next week with six more performances. Its last showing will be on February 23.