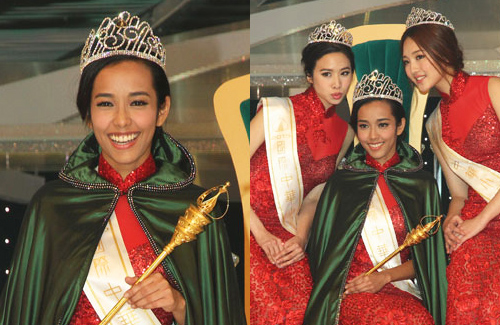 Prior to finals night, Mandy Chai maintained a low profile and she was considered as a dark horse candidate. However, her warm smile and impressive Samba dancing skills won over judges’ votes.  When the results were announced, Mandy could not stop crying and was surprised by her own win and said she would like to talk to the judges after the show. A nurse by profession, the 22-year-old will consider remaining in Hong Kong and whether she would pursue a career in the entertainment industry after the pageant.

Sweeping the awards at Miss Hong Kong earlier, Veronica Shiu once again demonstrated her strength in dancing by performing to Michael Jackson’s Moonwalk. The 24-year-old was satisfied with own performance and felt that she had already done her best. Commenting on Mandy’s victory, Veronica said, “She deserves the crown as she performed very well and displayed a good sense of humor. Perhaps I lost in this aspect.”

Although Catherine Hui from New York is only 18 years old, she was a hot media favorite due to her curvaceous 5-feet-7-inch figure. During the talent segment, Catherine impressed judges with her piano skills and elegance. A high school student, Catherine’s dream is to become a successful lawyer. Becoming close friends with many contestants, Catherine is sad to see the pageant draw to a close.