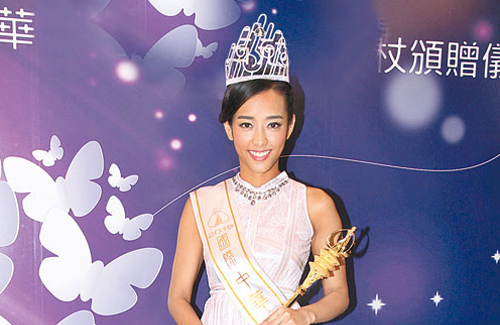 Attending the official crown presentation ceremony for the Miss Chinese International 2015 competition, winner Mandy Chai (蔡美霆) expressed her interests in stepping foot in the entertainment industry. Not feeling embarrassed, Mandy openly admitted to being a big fan of Bosco Wong (黃宗澤) and hopes to work with him in the future.

A beauty queen hailing from Sydney, Australia, Mandy was a nurse before entering the competition. Although she still holds the profession dear to her heart, she is interested in being an artiste.

Mandy revealed that her favorite male actor is Bosco Wong. “I would be happy if I got to see him and shake his hand. I think he’s very humorous.” Regarding to staying in Hong Kong to launch her acting career, Mandy said, “I’ll need to think about it first.”

Mandy called her parents to inform them the news after the competition. Still shocked that she is the winner, Mandy suffered from insomnia the entire night.

No Disappointment From Runner-ups

While Hong Kong’s Veronica Shiu (邵珮詩) delighted the judges with her dancing abilities on finals night, she lost the crown to Mandy and was placed as first runner-up. Not disappointed in the results, Veronica said she did her best in the competition. Asked if her short speech during the interview section upset Carol Cheng (鄭裕玲) during the show, Veronica laughed, “She didn’t purposely make it hard for me. Besides, I also complimented her a lot!”

Second runner-up Catherine Hui (惠櫸喬) from New York may only be 18 years old, but she was an early favorite due to her youthful and innocent charm. Catherine graciously commented, “I’m very happy that everyone likes me!” As to whether she would stay in Hong Kong to pursue a career in the entertainment industry, Catherine said she would think it over and decide later.