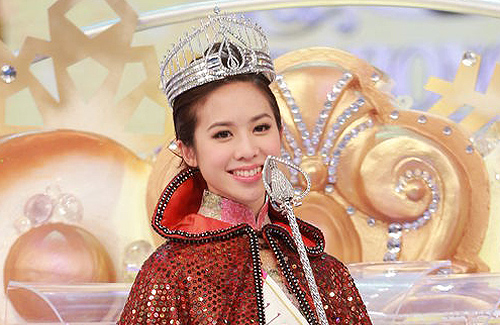 Despite the 150,000 votes Veronica Shiu (邵珮詩) received for the Miss Hong Kong 2014 pageant crown, controversies surrounding her win are still rampant. The media recently uncovered that Veronica’s grandfather, Shiu Wai Ming (邵蔚明),  is one of the founders behind the popular Vitasoy brand. The beverage giant has a long-term advertising partnership with TVB.

With Vitasoy’s $10.3 billion HKD market capitalization, Veronica’s family wealth is even more impressive than previous winner, Grace Chan (陳凱琳), whose father is a multi-millionare. TVB Deputy Director of External Affairs, Tsang Sing Ming (曾醒明), confirmed that Vitasoy has been a long-standing partner with TVB. But Veronica expressed that she did not receive special treatment because of her grandfather’s money.

“Everyone saw my performance that night, and I won because of my ability. My grandfather didn’t do anything to help me.” Veronica added, “The pageant staff and the contestants did not know who my grandfather is. I’m not sure about Vitasoy and TVB’s partnership, as I never asked my grandfather. I just know that he supported me spiritually and told me to do my best.”

However, other factors point at TVB’s favoritism towards Veronica over the course of the pageant. Apparently, Veronica used her status to her benefit. When the contestants had to pick out dresses for the pageant finals, Veronica decided that she wanted #7 Katherine Ho’s (何艷娟) feather dress for herself, and personally requested to have her own dress switched with Katherine. In response to the allegations, Katherine admitted that there were some wardrobe changes involved. Katherine also defended Veronica in winning the Miss Photogenic award.

Since Veronica’s good friend, Gloria Tang (鄧佩儀), was one of the judges involved in selecting Miss Photogenic, many concluded that Veronica won because she automatically received Gloria’s vote. However, Katherine disclosed that Gloria and #3 Linna Huynh (黃碧蓮) were also good friends and concluded that Veronica did not win the award because of her friendship with Gloria.

Rigged Results from Past Years

Past results from the Miss Hong Kong pageant were also marred with controversy over the selection of its winners. In 2010, Toby Chan (陳庭欣) was rumored to have won the crown because she was dating the heir of Korean sponsor, Mask House.

Edelweiss Cheung (張舒雅) was speculated to have won the 2008 crown because her family was one of the jewelry sponsors of the pageant. After the competition, Edelweiss’ grandfather said, “Thanks to all the staff for helping my granddaughter win first place.” His statement was regarded as a slip that the results of the pageant were fixed.

Despite her beauty, Aimee Chan‘s (陳茵媺) victory in 2006 was not without controversy. Aimee’s father is a restaurateur in Toronto and the Chans have a close relationship with former TVB Deputy Chairperson Mona Fong‘s (方逸華) cousin, Wong Ka Hee (黃家禧).