Mandy Wong, Jason Chan Work with Kids in “Daddy Has Something to Say” 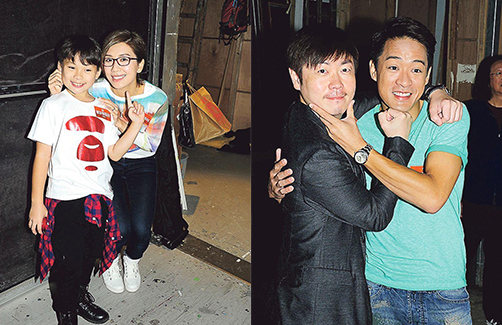 A blessing ceremony for TVB’s new drama Daddy Has Something to Say <爸B有話兒> was held recently. A critique on modern-day Hong Kong parents, the drama stars Johnson Lee (李思捷) and Jason Chan (陳智燊) as young fathers who go through life-changing experiences after learning how to raise their respective children.

In the series, Mandy Wong (黃智雯) stars as a tutor who looks after Johnson’s son at an after-school cram school. Mandy shared that most of her scenes so far have been with children, and Mandy did not expect herself to still be so patient after working with ten kids every single day.

The actress revealed that she dreams of opening her own education center someday in the future, and wants to teach kids how to sing and dance. Although it would be a difficult job, Mandy believes that it would also be a satisfying career.

Asking if Mandy plans to have her own kids in the future, she laughed and said that although she likes kids, having her own kids would give her a different feeling. “I’ll leave it to fate,” she said. “This is something that can’t be predicted. I would like to have a complete family, though, but that would also depend on god’s will. I don’t have plans or anything.” Asking if Mandy would think about having a flash marriage, she denied, “No, but I’ll definitely share the good news when it’s happening.”

Jason Chan and fiancée Sarah Song (宋熙年) will be getting married next year. Jason loves kids, and once expressed that he would want to have four, but after filming Daddy Has Something to Say, he said he’s not so sure anymore.

“Four [kids] is definitely a big challenge,” Jason said with a laugh. “I’ll discuss it with Sarah after finishing our marriage arrangements.”

Although the couple will not hold their wedding reception until late 2016, they have been diligently making marriage arrangements. “Thank you, Sarah,” Jason said. “She’s been doing all the work.”

7 comments to Mandy Wong, Jason Chan Work with Kids in “Daddy Has Something to Say”