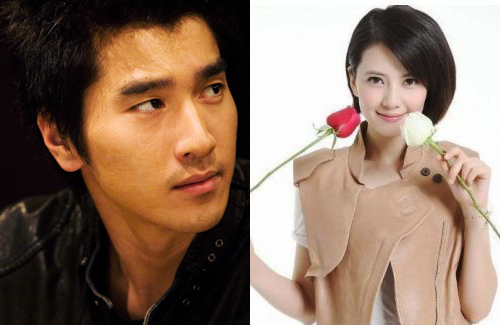 The couple was spotted at the Beijing Marriage Registration Department at 5 p.m. Mark attended a promotional event earlier in the day, and took advantage of his free time in the afternoon to get married. The couple were accompanied by the staff at the Marriage Registry and left quietly via a back exit afterwards.

“Both Mark and Yuanyuan agreed upon marriage for a long time. This afternoon, they finally had the time to register their marriage [in Beijing]. They will register their marriage again in Taiwan. Wedding celebrations will take place in Taiwan and Beijing,” Mark’s manager stated.  The wedding dates will need to be determined, as both Mark and Yuanyuan’s work schedules are packed for the year.

Mark and Yuanyuan fell in love on the set of director Chen Kaige‘s (陳凱歌) Caught in the Web <搜索> two years ago. Although Yuanyuan is older than Mark by five years, their personalities are very compatible and their relationship progressed quickly. Since last year, marriage and pregnancy rumors have persisted. A concrete indication that the couple was indeed planning to tie the knot emerged when Mark and Yuanyuan were spotted taking wedding photos in Paris on May 26.

Prior to falling in love with Yuanyuan, Mark had a deep first love with Wang Hui (王慧) and plentiful dating rumors opposite co-stars, Ivy Chen (陳意涵), Janine Chang (張鈞甯), and Belle Hsin (辛佳穎).

Yuanyuan was involved in a five-year relationship with musician Zhang Yadong (張亞東), but the relationship ended because he did not want to get married. Yuanyuan fell for Mainland actor Xia Yu (夏雨) in 2007 and was photographed entering his home on two consecutive nights. But the relationship broke off after Xia Yu reconciled with Yuan Quan (袁泉). In 2009, Yuanyuan dated good friend and actor, Xiaowei (小偉), but the differences in their career accomplishments caused a rift in the relationship.

Since Mark and Yuanyuan had circuitous relationships with others in the past, they cherished their own straightforward love and knew early on that they wanted to walk down the aisle together.