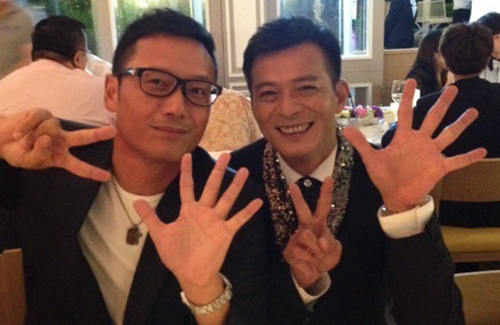 Felix Wong’s (黃日華) wife, Leung Kit Wah (梁潔華) was diagnosed with scurvy late last year. This caused a strain on Felix, who has led a semi-retired lifestyle in recent years to find work to finance her expensive medical bills. Felix was seen earlier visiting Kit Wah at the hospital, attentively caring for her during her illness. Fortunately, he has good friends such as Michael Miu (苗僑偉) and Andy Lau (劉德華) lending their support during difficult times.

After suffering from a fever that would not subside after a prolonged period, Kit Wah was hospitalized and found to have developed scurvy, a condition caused by an insufficient intake of Vitamin C. Kit Wah reportedly lost 20 pounds since becoming ill. An insider revealed, “Seeing how Felix visited his wife at the hospital every day [earlier], you can tell that he loves his wife very much. He looks so haggard now but whenever he sees his wife, he is all bright and energetic again.”

Although Kit Wah has left the hospital and Felix shared that she is expected to recover within the next six months, her monthly medical costs amount to nearly $100,000 HKD. Due to the high expenses, Felix has to take up more jobs. His time now is divided between caring for his wife and flying to mainland China, where he takes up event and endorsement jobs.

In Kit Wah’s early days of hospitalization, Felix kept her illness a secret even from their closest friends, including Michael Miu and his wife, Jamie Chik (戚美珍). Since Kit Wah’s situation became known, Michael gifted Kit Wah with the health products that he has endorsed. He also offered to arrange for Felix to film with TVB again to boost his income opportunities.

Once part of TVB’s Five Tigers, Felix maintained a strong friendship with Andy Lau over the years. When Andy heard of Kit Wah’s condition, he helped find the best health specialists to hasten her recovery. Although Tony Leung (梁朝偉) and Kent Tong (湯鎮業) are no longer close to Felix anymore, they also called to ask about Kit Wah’s health.

When Felix attended a soccer practice earlier, he spoke positively of Kit Wah’s condition. He reassured, “There is a problem with her blood, but she’s very good now. She will get better after half a year.” Felix also admitted that Kit Wah needs to go to the hospital frequently. When asked if Michael and Andy have helped him, he said, “They asked if I need anything and told me not to keep difficulties to myself. For the moment now, everything’s okay.”