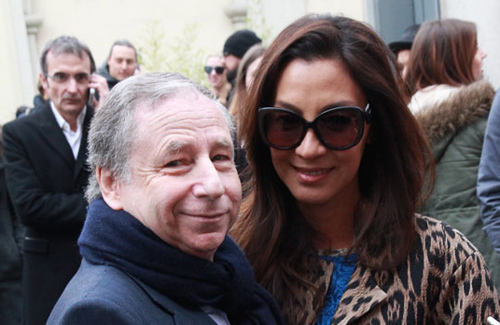 Michelle Yeoh (楊紫瓊) recently attended the unveiling of her new wax figure at Madame Tussauds in Hong Kong. Besides talking about her recent film projects, Michelle hinted at the possibility of getting married by the end of 2015.

Michelle’s newest wax figure was modeled from her hit movie Crouching Tiger, Hidden Dragon <臥虎藏龍>, and she lamented that she spent five hours posing in costume. Not one to stay still when posing, Michelle said her legs began shaking after only five minutes.

Admitting that her wax figure was rather thin looking, Michelle expressed she has been quite busy with travelling for work. Recently visiting India for eight days, Michelle spent most of the hiking, mountain climbing and visiting temples.

Michelle recalled, “I hiked around [two to three miles] and for the first several days, I couldn’t even move my body. My head hurt and after getting some oxygen, I went mountain climbing with others.”

When asked if she would consider inviting her fiancé, Jean Todt, to her hiking adventures, Michelle laughingly said if Jean went, others would have to carry him down the mountain on the return trip. However, Michelle added, “He’s been pretty good lately, Now instead of using the elevator, he’ll use the stairs. He also walks more often and has lost some weight.”

On whether or not this fitness regime was to prepare for the big wedding date, Michelle admitted that she does hope the wedding will happen at the end of this year. Unfortunately, due to work and the death of her father last year, no wedding plans have been solidified yet. Although Michelle has scheduled until the end of November, the actress hopes to hold several quiet celebrations in Hong Kong and Malaysia as opposed to one large banquet.

10 comments to Michelle Yeoh Still Too Busy to Schedule Wedding