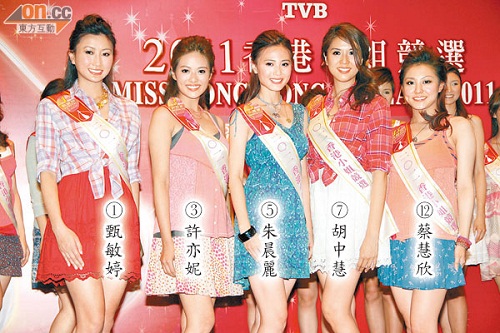 Although 2011 Miss Hong Kong contestant #3, Whitney Hui (許亦妮), was a “scandal queen” and plagued by negative rumors, she remained appealing to viewers. At yesterday’s event, Whitney was voted by the audience to win the “Bright Eye-Catching Beauty” Award. Although this award was not very prestigious, it boosted Whitney’s confidence and made her feel that the contestants were no longer strong rivals!

Receiving an award for the first time, Whitney Hui felt very happy. “Many thanks to the audience for their support!” (Your confidence has increased?) “My confidence has always been there.”(Your numerous romantic rumors did not matter to you?) “I already clarified that the rumors were false.” (Do you have confidence to be placed in the top three?) “That will depend upon the judges.” (Were you disappointed that the three male artists here today did not vote for you?) “No, whoever they selected were good quality.”

When asked who Whitney considered to be her biggest rival, she replied, “I did not consider them as rivals. My biggest rival would be myself.” When asked whether her confidence was overflowing, Whitney said, “No, but it’s necessary to have confidence in myself.” Whitney indicated that she was happy for Clayton Li (李晉強) in winning the 2011 Mr. Hong Kong Contest and admitted that he matched her preferences.

Contestant #5, Rebecca Zhu, received a vote from “Dancing King” Lai Lok Yi. Although she did not win the “Bright Eye-Catching Beauty” Award, Rebecca said she was not disappointed. She praised the other contestants’ qualifications and noted that everyone worked hard. Lai Lok Yi praised Rebecca’s beauty with light make-up. Coupled with her temperament, Rebecca gave Lai Lok Yi the feeling that she was a fairy. Jayne: The 2011 Miss Hong Kong Contest is getting close!