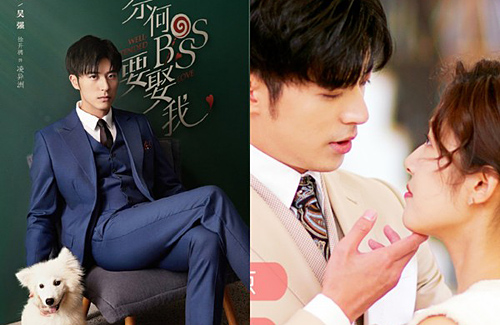 The accidental breakout hit of the year, low-budget production Well-intended Love <奈何boss要娶我> has evoked plenty of discussions and was picked up by Netflix. It saw the popularity of leads Xu Kaicheng (徐開騁) and Simona Wang (王雙一) spike overnight. Plans for its second season are already underway less than six months after the first installment was aired, with news of the original cast’s involvement driving fan anticipation up further.

An adaptation of the popular online novel by Chunfeng Yidu (純風一度) , the real-life version web drama won over viewers as well as fans of the novel. Lead actor Boss Lin’s methods of pleasing his wife and injecting sweetness into their married life, as well as the numerous kissing scenes throughout such as “cherry kiss”, “finger kiss” and “drunken deep kiss” have also gone up search rankings and attracted the attention of viewers.

After the second season was confirmed, fans were invited to give suggestions for the story and the director himself was also captured on camera joining in the script discussions. Many are looking forward to the reunion of the Lins in the confirmed sequel, as they have already welcomed their first child in the first season. On Father’s Day, a poster of Boss Lin carrying a smiling boy was published, further fueling fan anticipation.

At 6-feet-1-inch tall, lead actor Xu Kaicheng has been labelled a Wallace Huo (霍建華)-lookalike with his height and charming looks. His fan numbers on Weibo also reached a staggering million after the drama aired, shocking even the star himself.

Interviewed by the media, he shared honestly, “When I first saw the script, I candidly asked the director how I should play my role, since the descriptive plot did not provide a clear picture of what the scene looks like. But the director was very assured about me (playing the role) and told me I would naturally have ideas after filming started.”

Although it is Kaicheng’s first collaboration with Simona, the two had good chemistry and often took  their meals together during filming breaks to develop a better onscreen bond.