Last month, mother of two, Linda Chung (鍾嘉欣), returned to Hong Kong from Vancouver to film TVB’s Children’s Hospital <兒童醫院>. However, filming has slowed down shortly after production commenced due to the COVID-19 pandemic. With extra time on her hands, Linda met up with good friend Myolie Wu (胡杏兒) for a singing session. 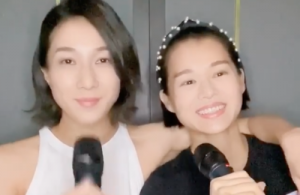 The pair shared two videos of them singing Myolie’s “Fortunately” <幸而> and Linda’s “Swear” <發誓> on social media with their fans who have been with them since the beginning. Myolie expressed on social media, “Now that we are older and past our crazy working hours from back in the days, and you’re living halfway across the world, we still got to sing our first songs together. It’s definitely a moment to remember, and we would like to share them with our fans, [we] hope you like them as much as we do.”

The two first met back in 2006 for TVB’s “Lady in Red” <金牌女兒紅> album, which included theme songs from various female artistes. Linda shared, “We were newbies in the singing industry. Her first song was ‘Fortunately’ while mine was ‘Swear’ in the ‘Lady in Red’ album. ‘Fortunately’ is my favorite song out of the entire album, by the way.”

Still, they didn’t make their official debuts as singers until 2008. It was around that time that they reached new heights of success at TVB, securing fa dan status alongside Tavia Yeung (楊怡), Fala Chen (陳法拉), and Kate Tsui (徐子珊) during the 2010s. Since both actresses received many work opportunities, they crossed paths many times. In 2011, they collaborated in the TVB drama, House of Harmony and Vengeance <耀舞長安>, and kickstarted their incredible friendship. 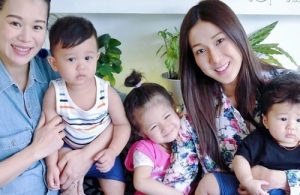 After many years of being top actresses, Myolie and Linda have both gotten married and have children of their own. For Linda, she has moved back to Vancouver after marriage, but she would meet up with Myolie whenever she is back in town. This time, she documented their reunion with a video for fans. “It was a beautiful day spending some quality time with a dear friend,” she wrote on Instagram. “Here’s a little something for you guys. It feels really cool for me to be in HK again singing my good friend’s song with her. Memories flow, and I’m thankful for the relationship we still have.”

It’s three boys for Myolie, who said she doesn’t want any more babies.