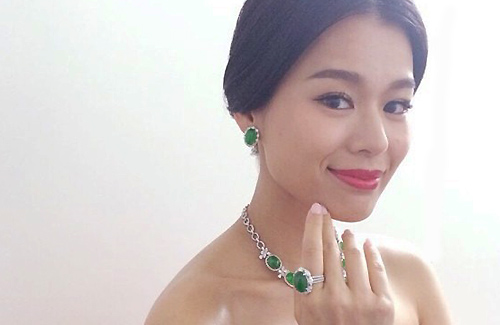 Sire Ma‘s (馬賽) explicit lingerie video and lesbian love affair with married mainland businesswoman, Wang Ziqi (汪子琦), has been the hottest topic in Hong Kong entertainment for the last week. Ziqi claimed she and Sire took more sex photos and videos together, and said Sire had a habit of sending her steamy content over the cell phone. Although Sire’s public image nosedived, her TVB colleagues Myolie Wu (胡杏兒), Sharon Chan (陳敏之) and Moses Chan (陳豪) have come forward to support her.

Sire’s lingerie video has been circulating virally since it was uploaded on the Internet. While others have passed judgement on Sire’s actions, Myolie asked netizens to do the right thing and leave Sire alone. Myolie posted on her Weibo blog, “Imagine, what type of mistake permits a woman to suffer from such a big punishment? Imagine, how much money did she cheat? How much affection and love did she cheat? Imagine, if a woman doesn’t fully trust her partner, why would she go nude and unreservedly give her body to the other person? Imagine, what if this happened to you? Imagine, if this woman is your younger sister, your elder sister, your family member, or friend – would you still be willing to be an accomplice in this situation?”

Myolie’s post incurred the wrath of wealthy mainlander Laura Lee, whose love relationship was destroyed by Sire’s affair with Wang Ziqi. Laura retaliated by hinting at Myolie’s ex-boyfriend Bosco Wong’s rumored infidelity. Laura shot back, ” If a woman uses every inch of her body to seduce your other half, would you be an accomplice?” and added, “I believe you have experience in tracking down [your partner’s] cheating habits?”

Myolie replied calmly, “Laura, let go of others and let go of yourself. Wish you happiness.” Myolie’s post may have upset others in addition to Laura, as an old sex video featuring a woman resembling Myolie was re-circulated online last week. Since the woman had a tattoo on her waist, it was proven not to be the real Myolie.

Moses Chan: “It Didn’t Hurt Anyone”

Asked to comment on Sire’s video scandal, Moses Chan said, “From a logical standpoint, many people will do the same thing in sending such a video to an intimate partner. Since the video is now leaked publicly, I will not make any speculations. The video was made because of love, so it’s generous [in nature] and didn’t hurt anyone. There is a reason for it.”

As for his own love life, Moses said he has not taken such intimate photos of himself. “There are so many cameras in this age and it’s easy for them to circulate online. I would be dumb to take such photos.”

Regarding his personal assessment on Sire’s character, Moses said, “I don’t know her well, but she is a good actress.”

At a camera promotional event, Sharon Chan , expressed that she is a big fan in taking selfies and filming videos. She has many photo editing apps on her phone, but only takes photos when an happy event occurs. Sharon’s boyfriend is very low-key, so they rarely take intimate photos together. In response to Sire’s provocative dancing video, Sharon sincerely hopes that the situation will get resolved soon and believes that dating is a very private matter between two people.