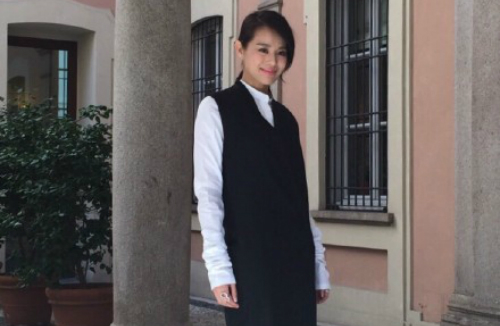 During her 36th birthday party on November 6, Myolie Wu (胡杏儿) publically announced that she would be tying the knot with entrepreneur boyfriend, Philip Lee (李乘德). Having dated for one year, the couple will hold their wedding on December 28, 2015, at The Ritz-Carlton in West Kowloon, Hong Kong. Full of joy and excitement, Myolie shared several wedding photos on her social media profile.

Recent reports speculate that Philip is not as rich as he seems. Despite being the shareholder of a nightclub, earlier tabloids reported that he only possesses one-fifth of the stock. He allegedly does not even own a property or a car. However, Myolie does not seem to mind her fiancé’s lack of assets, as long as they successfully hold their upcoming wedding.

Allegedly, Philip moved into Myolie’s luxurious flat in Caldecott Hill after dating for only three months. Furthermore, he reportedly became the “man of the house” and kicked out Myolie’s second eldest sister, who used to reside in the flat. According to a close friend of Myolie’s, the Wu family is not too fond of Philip, and prefers her ex-boyfriend Bosco Wong (黄宗泽) instead.

The source spilled, “Since they didn’t date for a long time, Myolie’s family told her to think about it carefully. They can see that Philip does not have money, and he has been rumored with many former Miss Hong Kongs. In fact, they think Bosco had been more generous while dating Myolie, since he gave her a car and a home, and would also buy gifts for them during the holidays. But since Myolie loves Philip, they can’t really do anything about it.”