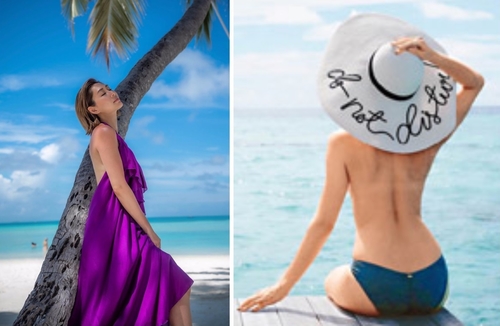 Since winning Best Actress in 2015 and 2016, TV Queen Nancy Wu (胡定欣) slowed down her work pace to focus on achieving a healthy work-life balance. With her contract nearing its end, it seems like the 38-year-old may not renew it to pursue opportunities outside of TVB that can better accommodate her lifestyle instead. Recently, the actress is seen enjoying her holidays in the Maldives along with her good friends in the “The Nonsense Club” including Myolie Wu (胡杏兒), Paisley Wu (胡蓓蔚), Elaine Yiu (姚子羚) and Selena Li (李施嬅).

Traveling to a beautiful place known for its beach and sunshine, the group of sisters made sure to take advantage of their vacation spot with a photoshoot. Based on the photos posted by each person, the actresses showed themselves striking poses skillfully while in a comfortable state of happiness. It’s clear this trip was meant for them to reward themselves for their hard work this year and recharge for the upcoming end of the year events.

Besides the group photos, their individual photos also took away the breath of many fans. Nancy’s fans were perhaps the most rewarded, as she boldly posted a photo of her topless back on social media. In the photo, she faces the clear blue water while topless and wearing a white sunhat etched with the phrase “Do not disturb.” For her bottom, she wore a blue triangular-shaped piece that helped accentuate her nice and slim figure.

As soon as the photo was posted, it became an instant hit, garnering praises from over 110,000 netizens within just under 24 hours. It caused significant attention amongst fans and her celebrity friends, as they teased her to turn around and share a photo of her frontal view. In response to this attention, Nancy responded in an interview that everyone worked hard to keep fit for the trip.

She said, “Because we knew we would take swimwear photos, I made efforts to control my diet and train hard so I can leave behind a memorable photo. This photoshoot wasn’t easy, but I’m pretty confident in my back, so I hope it didn’t disappoint.”

Elaine Yiu Talks Every Member of the Nonsense Club

The “Nonsense Club” Goes On a Trip Sans Mandy Wong

8 comments to Nancy Wu Goes Topless in the Maldives