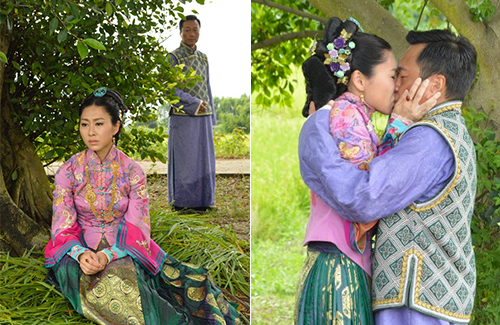 Wayne Lai (黎耀祥) and Nancy Wu (胡定欣) had a very difficult time shooting their kiss scene in the TVB period drama Short End of the Stick <公公出宮>, which is currently airing in Hong Kong.

The post-Qing Dynasty drama, which also stars Raymond Cho (曹永廉), Power Chan (陳國邦), and Edwin Siu (蕭正楠), tells the comedic story of a group of expelled palace eunuchs who become servants for a wealthy matriarchal family. The serial premiered on February 9, 2016 and is slated to air its last episode on March 26, 2016.

In the most recent series of episodes, the drama’s central couple Lee Suk-gung (Wayne Lai) and Kam Heung (Nancy Wu) finally admit their feelings for each other, but Suk-gung feels unworthy for her love because he is unable to sire children with Heung. He then pretends to be a gay couple with Dan Tin (Power Chan) so Kam Heung would not pursue him further. However, Kam Heung figures out Suk-gung’s intentions and kisses him in front of a crowd.

When speaking about the kissing scene, Nancy recalled, “We shot the scene in Kaiping under 40 °C weather. It did, without a doubt, got me very wet! Wayne and I have shot a kiss scene before for Rosy Business <巾幗梟雄>, but it wasn’t as intense as this one.”

Wayne said with a laugh, “That day my wife was also present. She took pictures of us!”

Raymond Cho, who plays Chan Siu-fung in the series, said, “I remember that scene very well. That day was very hot and stuffy. [Wayne and Nancy] wasn’t feeling it. We the onlookers didn’t enjoy looking at them either.”

Producer and show runner Marco Law (羅永賢), however, had nothing but praises for the onscreen kiss. He said, “It is a beyond a doubt that TV Queen and TV King would do well. They finished it in one take.”

Mentioning that Short End of the Stick is earning rave reviews and high viewership ratings, Marco Law said the cast and crew would be getting together on March 3rd for a celebratory dinner. He also said he would get Wayne to pay the check.

Upon hearing this, Wayne said, “No problem. As long as everyone is happy.”

Asking if Raymond Cho would also contribute to the dinner, he said, “Of course! I’ll contribute a few dollars. There’s no way I should contribute more than TV King Wayne. He earns millions a year!”