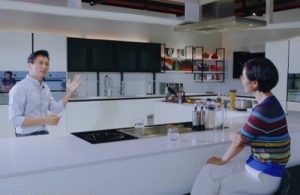 The multifaceted Nicholas Tse (謝霆鋒) is not only great on-screen and in the kitchen, but he even has experience in the business realm as a CEO – earning him a guest appearance on a finance show recently. When the host asked Nicholas for his thoughts on the difference between today’s new generation of artistes and those from his time, he expressed that celebrities are luckier nowadays because even newcomers get five to eight assistants from the start. He then grumbled about one of his guest stars on Chef Nic <十二道鋒味>, sparking a heated discussion among netizens.

As the person responsible for the business of aspect of his show, Chef Nic, Nicholas takes note of how many assistants his guest stars bring to set. Having invited over 90 guest stars over the span of five seasons, Nicholas has been shocked and surprised to see certain celebrities’ entourage.

Admitting that he was displeased with the cost of the accommodations, Nicholas disclosed, “Sometimes I would ask myself, ‘Who does he think he is? We don’t need him.’ But the world is so big now, and many newcomers will have such requests!”

Though Nicholas did not reveal any names, many netizens were displeased with him boldly sharing these details. Still, others supported his bravery for speaking up.