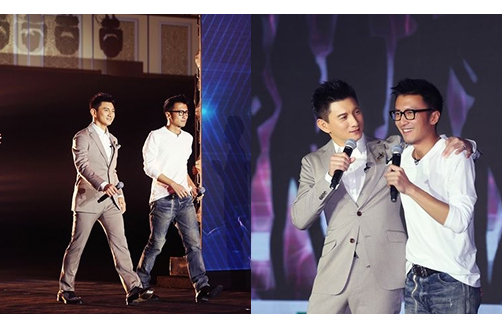 Superstar idols Nicholas Tse (謝霆鋒) and Nicky Wu (吳奇隆) attended a press conference for their upcoming reality TV series Lady Bees <蜜蜂少女隊>, produced by Zhejiang TV. The survival show stars Nicholas and Nicky as mentors for an upcoming Chinese girl group. Each mentor is responsible for leading his own team of trainees, and the winning coach’s team will get the chance to debut.

The former pop idols said they are honored to be given the opportunity to bring up a new generation of idols. “They entrusted their lives to you, so you must be worthy of their trust,” said Nicholas.

Nicholas and Nicky had two completely different approaches toward mentoring the girls on the show. Nicky said he took the nice guy approach, nurturing the girls to develop and find more of their own talents. Nicholas, on the other hand, was more strict, believing that strict training would build a more well-rounded artist.

In January 2015, Nicky married his Scarlet Heart <步步驚心> costar Cecilia Liu Shishi (劉詩詩). Last month, the couple were spotted in New Zealand taking wedding photos, but they kept the date of their wedding ceremony under wraps.

When a reporter asked for their wedding date, Nicky laughed and said, “If I said it, there wouldn’t be any surprise.” Nicholas then blurted out, “March 5th.” His response shocked Nicky, who immediately gave Nicholas a crushing shoulder hug. Nicholas quickly clarified that he was only trying to promote the show’s premiere date. Everyone broke into laughter when a reporter reminded Nicholas that the show actually premieres on March 12th.