Nicky Wu and Cecilia Liu Hold Hands in the Airport 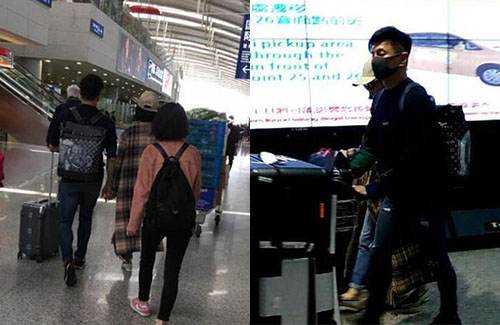 Fans gushed over Nicky Wu (吳奇隆) and Cecilia Liu Shishi (劉詩詩) as the couple were spotted at the Shanghai’s Pudong International Airport, on their way back to Taiwan to spend some ample time with Nicky’s parents.

On April 14, the Scarlet Heart <步步驚心> couple quietly arrived at the Pudong International Airport with a few of their assistants. They were originally walking a few suitcases apart, but they soon walked closer together and held hands.

A few hours later, the couple were spotted in Taiwan’s Taoyuan International Airport, unloading their luggage in a mini-van. Netizens speculate that the couple are in Taiwan to visit Nicky’s parents.

In an interview published on Thursday, Cecilia said she recently visited Nicky on the set of his new drama in Hengdian. The Imperial Doctress <女醫·明妃傳> actress said their frequent meetings help them overcome their long distance relationship.