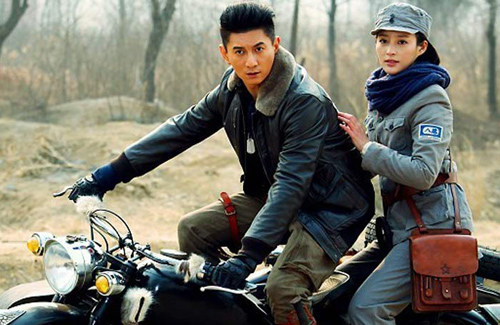 Nicky Wu (吳奇隆) and Gan Tingting (甘婷婷) play the leading roles in new World War II drama, Advance Towards the Fire <向著炮火前進>. During a press conference in Beijing, Nicky discussed his role as the leader of a local gang, and his experience in filming kissing scenes with costar, Gan Tingting.

Nicky portrays a leader of a local gang, Lui Chee Fung, nicknamed “Crazy Lui” in the drama. To fit his image as an eccentric leader, Nicky grew long sideburns and a thick crop of hair on top, while wearing sunglasses and leather jacket. Many people complained that his image in the show is too modern and does not fit the era.  However, Nicky explained that his hairstyle and wardrobe reflect American fashion in that era. As a thief, it is natural for his character to get a hold of this kind of clothing, which Nicky felt fit well with the story line.

In Advance Towards the Fire, Gan Tingting plays an agent who studied abroad and specializes in data decryption. She will be involved in relationships with Nicky Wu and a guerilla group leader played by Wang Xin (王新). Nicky and Tingting will share many romantic scenes together.

Gan Tingting is a “Garlic Barbie”

Filming romantic scenes with Gan Tingting required Nicky’s patience. Nicky jokingly said, “I have to file a complaint. After filming the drama with Gan Tingting, I gave her a nickname, ’Garlic Barbie’. I have about 4 to 5 close up scenes with her, and every time she always had a strong smell of garlic. The first time I kissed her strongly on her lips, I questioned her immediately why she had a taste of garlic in her mouth. She told me she just ate some cold noodles with garlic. The second time we had to do a close up dancing scene, she just finished eating some food with added garlic chili oil. It happened a few times already; I have to wonder whether she did it on purpose.”

Nicky said he usually chews gum or makes sure to brush his teeth before filming kissing scenes. However, when dealing with someone like Tingting, he vowed to start eating garlic to make it a fair game.

“Advance Towards the Fire” Trailer