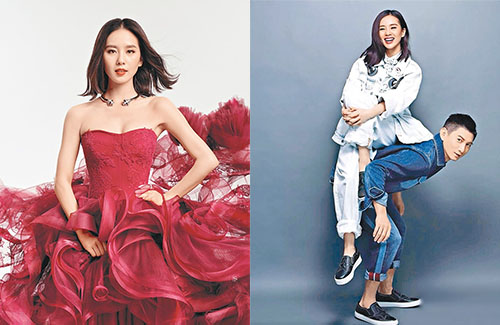 Nicky Wu (吳奇隆) loves to spoil his wife, and with the rumors of his wife’s planned retirement, it’s not a surprise to know why.

In 2016, Scarlet Heart <步步惊心> costars Cecilia Liu Shishi (刘诗诗) and Nicky Wu tied the knot in a romantic beachside wedding in Bali. Influenced by her husband, Cecilia started to dabble into doing more producing work, starting off with co-producing Legend of Zu Mountain <蜀山战纪之剑侠传奇> and The Legend of Zu 2 <蜀山战纪2踏火行歌> alongside Nicky. Last year, made her solo producing debut with the period drama Lost Love in Times <醉玲珑>, which she also starred in.

Nicky isn’t shy with telling people about how much he loves treating Cecilia like a princess. When the couple were offered a high salary to star in a Chinese reality show, Nicky turned down the offer and said, “She doesn’t need to suffer through that!” Cecilia had commented about Nicky’s cheesy response, saying that she’s used to hearing it all the time.

With Nicky’s rumored net worth of over 1.7 billion yuan, Cecilia really doesn’t need to work, and she doesn’t. Despite having busy work schedule, Nicky insists on cooking and doing housecleaning work every single day so Cecilia would not have to work too hard. Nicky was once spotted picking up Cecilia at the airport while still wearing his costume. He helped carry Cecilia’s luggage and jacket while still holding her hand.

Nicky doesn’t mind sacrificing his diet for Cecilia either. The Lost Love in Times actress is known for her obsession with hot pot, and Nicky would always bring her for hot pot meals. At one point in time, Nicky purchased four luxury homes at the same time, in which one was for Cecilia.

The couple are inseparable, with media dubbing them “the conjoined husband and wife.” Always traveling across the country to work, the couple rely on visiting each other on set to keep the spark alive. A source said Nicky was actually on set when Cecilia filmed her kissing scene with William Chan (陳偉霆) for Lost Love in Times, and that got William feeling very awkward.

Though Cecilia’s values are rooted to her family, she has kept herself busy with work after marriage. Whether or not she wants to retire from the screen, Cecilia definitely shows interest in doing more behind-the-scenes work. She currently has one drama left to air, which gives her plenty of time to start working on new ideas for her new producing career.

9 comments to Nicky Wu Pampers Wife, Cecilia Liu to Retire From the Screen?