Legendary Casino Kingpin Stanley Ho (何鴻燊) passed away on May 26, 2020 at approximately 5:00 a.m. in Hong Kong Sanatorium & Hospital. He was 98. His family, who was beside him on his deathbed, confirmed his passing at 3:00 p.m. on Tuesday.

Living a life of legacy, Stanley’s history was immortalized in a duology of films directed by Wong Jing (王晶). He was also infamous for his many affairs and having a large family, akin to that of an emperor’s harem. He had four wives and seventeen children. Known as one of the first Hong Kong billionaires, his large financial empire had always been the center of interest for the media.

Stanley accomplished many great things throughout his life, but the most memorable of all occurred ten years ago, when his family of four houses got involved in an inheritance dispute that topped headlines across Hong Kong, Macau, and mainland China for several years. It all started on July 29, 2009, when Stanley fell and injured his head at the home of his fourth wife Angela Leong (梁安琪). He was rushed to the emergency room, his life at risk. Reports at the time falsely claimed that he had died. News reports emphasized that Stanley hadn’t revealed his will, nor had he considered how to delegate his assets to the four houses. This fall kickstarted a longwinded inheritance dispute that topped headline for the next few years.

Stanley Ho Was “Coerced” to Allocate his Assets a Certain Way

On December 20, 2009, Stanley requested a temporary leave from the hospital to attend celebrations for the tenth anniversary of Macau’s handover back to China. Stanley was away from the hospital for seven hours, and even greeted Hu Jintao (胡錦濤), then-president of China, at a public event. 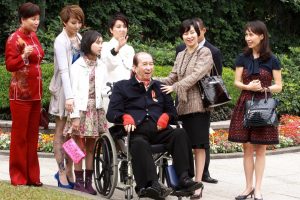 On December 2, 2010, Stanley announced that 251 million shares of the Shun Tak Group, which was worth a market price of $1.2 billion Hong Kong dollars, would go to the second house, which includes his second wife Lucina Laam (藍瓊纓) and her five children Pansy Ho (何超瓊), Daisy Ho (何超鳳), Maise Ho (何超蕸), Josie Ho (何超儀), and Lawrence Ho (何猷龍). Less than two weeks later, he announced that seven percent of his gambling empire SJM Holdings in Macau, which was worth HK$4.8 billion, would be transferred to his fourth wife Angela Leong, making Angela the second largest shareholder in SJMH. Three days later, Angela was appointed as its executive director. The media speculated that Stanley’s early decision in distributing his assets was to prevent an inheritance war after he passed away.

On December 27, 2010, a week after Angela was appointed the role as executive director, SJMH announced that Stanley’s largest shareholder, Lanceford Company, would undergo a change in shares. Stanley’s personal shares would be re-distributed to the second and third houses. The fourth house reportedly disagreed with this change, and Stanley himself said he had no knowledge of this change until after it was publicly reported. 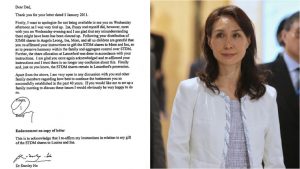 According to reports, Stanley tried to get in contact with his fifth daughter Daisy Ho of the second house, demanding her for an explanation. On January 5, 2011, Stanley publicly invited Daisy to meet with him at his manor to discuss the matter. Two days later on January 7, Daisy returned Stanley’s message in the form of a public letter. She thanked her father for “gifting” the SJMH shares to her mother and third wife Ina Chan (陳婉珍), so as to “preserve [harmony within] the family and aggregate control over SJM.” She re-affirmed that Lanceford only reallocated the shares under his instruction, and even shared a signature of Stanley, proving that Stanley did agree to this reallocation.

On January 25, 2011, Stanley released a statement through his lawyer Gordon Oldham, referring to Lanceford’s reallocation of shares as “something like robbery.” He stated, “I know nothing of it, and then I sign something. [They had forced] me to sign.” Stanley gave Oldham the go-ahead in suing the second and third houses if they did not reply within the next 48 hours. 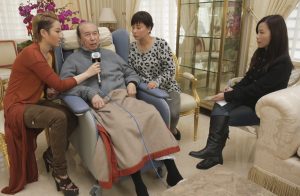 The third house responded immediately that day. Accompanied by her eldest daughter Florinda Ho (何超雲), Ina Chan held a public press conference to deny Stanley’s claims of robbery. She explained that the reallocations had all been “a misunderstanding” and emphasized that it was unnecessary to involve lawyers in family matters.

The following day, Stanley and Ina appeared in a live broadcast aired exclusively through TVB Jade. The ailing Stanley was sitting in a wheeled armchair as he read out a statement to the media. He expressed that he loved his family, and clarified that the legal disputes with the second and third houses were never officialized in the first place. He then thanked Oldham and his associates for their assistance, but added that he no longer needed their help.

After this live broadcast, fourth wife Angela Leong flew directly back to Hong Kong from Macau via helicopter. She spent 20 minutes in Stanley’s manor before leaving. The media was also able to photograph Deborah Ho (何超雄), third daughter of Stanley’s deceased first wife Clementina Leitão (黎婉華), entering Stanley’s manor with Oldham around 4 p.m. 20 minutes later, she and Oldham left the manor with a file and a check in hand. They were then seeing going to Hong Kong’s High Court to submit a lawsuit. That evening, Deborah’s older sister Angela Ho (何超賢) released a statement to the media, stating that she was “uncomfortable” with certain members of the Ho House, implying that they had coerced her father to distribute his assets in a certain way. She expressed that it was unlike of her father to completely forget about the children of the first house, as his first wife Clementina had made huge contributions to his casino empire years ago.

On February 16, 2011, Stanley announced through his lawyer Oldham that he was suing Pansy Ho, Daisy Ho, Ranillo Investments, and Action Winner for their failure to return the shares from Sociedade de Turismo e Diversões de Macau, aka STDM. He also requested an injunction to restrain them from using or selling the shares. However, on February 21, Stanley ended the lawsuit. This announcement was followed by a two-week hospitalization. On March 10, 2011, he announced that his dispute with his family had ended.