After their undeniable chemistry in Legal Mavericks <踩過界>, Owen Cheung (張振朗) Vincent Wong (王浩信) are partnering up again in the currently-airing Al Cappuccino <反黑路人甲>. Proving that their onscreen magic is not just a fluke, the duo’s comedic interactions continue to impress viewers.

With a design background, Owen joined TVB after a singing contest and enrollment in the station’s artiste training class. Making his debut in 2012’s Come Home Love <愛·回家>, Owen rose to prominence after Legal Mavericks and Airport Strikers <機場特警>. After nine years in the industry, does Owen hope to receive an award at the TVB Anniversary Awards? The 33-year-old replied, “I’ve never thought about awards. I’d rather be given a fun and challenging role to portray than be given an award.” 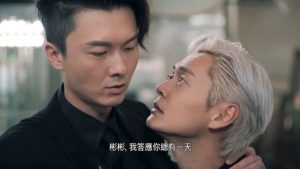 Winning rave reviews for his performance in Al Cappuccino, Owen’s character is quite different from his past roles. Owen credits Vincent for helping him ease into his character, “In the past, my roles were frivolous, proud, impetuous, and impulsive. This time, my character is a little heavier with depth. In the beginning, I wasn’t used to it. Once I started filming with Vincent, I became much livelier.”

Filming with a good friend sometimes made it hard to hold back their laughter. One memorable scene was the actors’ passionate kiss. The room was very quiet at the time, and he could even hear Vincent’s breathing, which made Owen laugh out loud when they kissed.

Aside from his scene where he runs on the streets in the buff, Owen’s kissing scene with Vincent is the second most controversial scene in Al Cappuccino. When asked if he had discussed the kissing scene with his girlfriend, Renci Yeung (楊偲泳), Owen said, “There’s no need. When it is aired, we can watch it together!”

Dating the ViuTV actress for well over a year, Owen appreciates his girlfriend’s wonderful personality, but they are in agreement to prioritize their careers ahead of any marriage plans. “Right now, we are in a very happy phase in our relationship. We both love to act and would often study acting together and watch movies. We have a lot in common and many things to converse about it. We hope our relationship will be long-term.”

From Flab to Fab: How Owen Cheung Gained Muscles