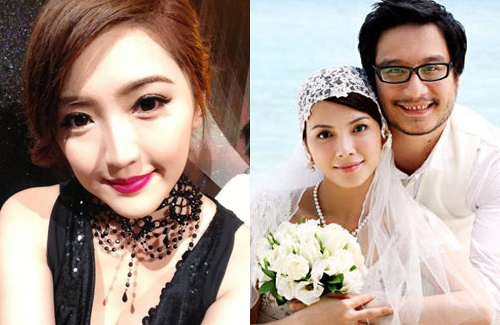 Angelica Lee (李心潔) has forgiven director Oxide Pang (彭順) for cheating in their marriage, stating that they will work on repairing their broken 12-year relationship together. Although Oxide apologized publicly to Angelica for betraying her trust, inside sources claim that he is still secretly communicating with lover, Liddy Li (李悅彤), since the affair was exposed. The 26-year-old model is unwilling to let go of Oxide, who took financial care of her over the last year.

With Angelica residing in Malaysia, Oxide and Liddy allegedly have been living together in Hong Kong. In November, Oxide celebrated Liddy’s birthday with his filming crew. In January, Oxide and Liddy were photographed in a heated argument inside a mall in Causeway Bay. On May 23, Oxide and Liddy were caught kissing on a movie date. Liddy was suspected to have tipped the press on the affair, which stressed Angelica but did not push her to a divorce decision.

With plain looks, and a rather average body, Liddy did not have a lot of opportunities despite having been in the industry for seven years. Virtually unknown before dating Oxide, Liddy was also a difficult artiste to manage. After getting into an argument with a record company manager, she was unable to release her music album. She only had extra roles in films, Lan Kwai Fong 2 <喜愛夜蒲 2> and A Wall-less World 3  <沒有牆的世界 III>.

Last year, Liddy got into another fight with her management company for taking jobs under the table without the company’s knowledge. Liddy’s ex-manager said that Liddy paid over $1 million HKD to end her contract; the money was suspected to have come from Oxide.

Many of Liddy’s friends indicated that the 26-year-old is unwilling to let go of Oxide because of personal gains. “Liddy has dated people outside the industry before, but it was different when she was with Oxide. When her career was not going well, having a director boyfriend is helpful. They actually broke up in the beginning of the year because Liddy forced him to choose between her and his wife. Since she was impatient, she initiated the reconciliation, and they were back together quickly,” an insider revealed.

Unfortunately, it was not the first time Oxide had cheated on Angelica. In 2007, model Kama (羅凱珊) was photographed with Oxide at a hotel. That affair may have dispersed very quickly, but Liddy, on the other hand, will not let go so easily.