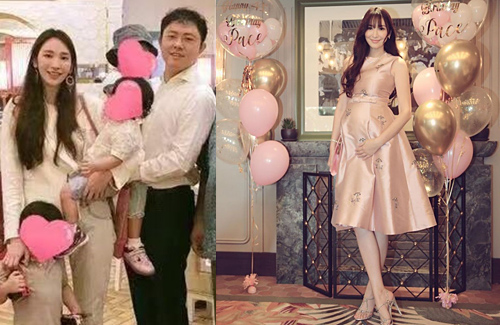 Former Taiwanese model Pace Wu (吳佩慈) has been dating Hong Kong billionaire Ji Xiaobo (紀曉波) for more than five years. The couple shares three children, and Pace is currently pregnant with her fourth child. Despite being 41 years old this year, Pace had previously declared her desire to have five children. It seems that she is a woman of her word and is well on her way to meeting her goal!

Although the couple have children together, by all accounts, a family unit, Ji Xiaobo does not seem to have any plans to marry Pace. They seem to maintain a good relationship and are comfortable with their arrangement. With Pace’s previous pregnancies, Ji Xiaobo lavishly gifted her a luxury mansion, jewelry, and shares in companies. It is unknown, however, whether he will gift her anything with her fourth pregnancy, as it is rumored that Ji Xiaobo may be struggling financially.

Due to the poor economy, it was reported that Ji Xiaobo lost $3.3 billion HKD last year, and currently owes debts amounting to $6.4 billion HKD. Due to his company’s debts, Ji Xiaobo allegedly mortgaged his luxury mansion, which he previously gifted Pace, to the bank. In addition to financial woes, Ji Xiaobo and his family are also rumored to be at risk. Not only was he seen with additional bodyguards, Ji Xiaobo also moved his family out of their Four Seasons Hotel that they stay at semi-permanently. Rumors of Ji Xiaobo’s financial difficulties were furthered fueled when they suddenly dismissed several employees at their seven-star hotel business.

Despite all the evidence pointing to plausible belief that Ji Xiaobo is facing financial problems, these allegations did not seem to affect Pace’s mood, who is currently seven months pregnant. In a social media post, Pace appeared glowing with her baby bump. Despite being seven months pregnant, Pace’s limbs still remain slender. Pace wrote, “My belly does not seem noticeable because I am wearing black. In actuality, it is as big as a basket!”

Pace Wu’s Boyfriend is Having an Affair with Jelly Lin?