Phoebe Sin to Give Birth in May 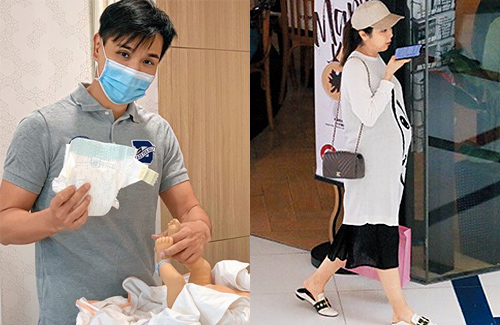 Ruco Chan (陳展鵬) and Phoebe Sin (單文柔) got married in October 2018 and revealed one month later that they are expecting their first child. At their baby shower last month, they announced they are having a girl. As it will only be a matter of weeks before Phoebe gives birth in May, the couple could not wait to meet their daughter.

Ruco is busy filming TVB drama Chinatown <唐人街> while Phoebe is busy preparing for the baby’s arrival. Though it may appear Ruco only focuses on earning money, he is actually extremely excited in becoming a father and even attended prenatal classes to prepare himself.

For the heavily pregnant Phoebe, other than planning the baby shower herself, she recently met with an insurance broker at a coffee shop. After thirty minutes of discussion and signing papers, the 28-year-old actress left the shop and immediately texted her husband. She was spotted continuously texting while walking. Though her steps are light, it is still relatively dangerous to focus on her phone even when crossing the road.

However, Phoebe doesn’t seem have the slightest concern, as she is instead more worried about Ruco getting injured during his action scenes in Chinatown. Feeling pained at him having to visit the clinic for treatment, she had commented on social media, “Can you be more careful?”

With the baby’s arrival coming very soon, fans are just as eager as Ruco and Phoebe to see the little princess.

5 comments to Phoebe Sin to Give Birth in May