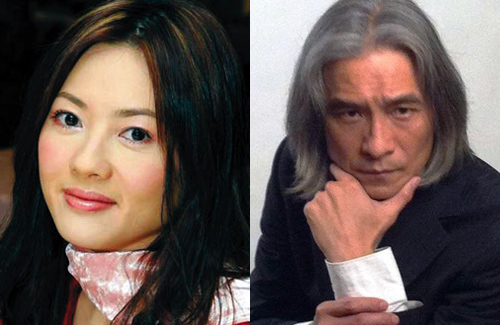 Sex goddess Rachel Lee (李麗珍), formerly known as Loletta Lee, had her fair share of ups and downs in relationships. Her marriage to Clarence Hui (許愿) did not last long. The pair soon divorced after their daughter was born. After many twists and turns, fate brought Rachel back with her ex-boyfriend, Calvin Poon (潘源良).

In 1985, while shooting a movie together, the married Calvin fell in love with Rachel while she was in a relationship with Patrick, the younger brother of Debra Li (狄波拉). The complicated relationship ended with Calvin divorcing his wife to be with Rachel.  However, at that time, Rachel was already with someone else.

More than twenty years passed and in a twist of fate, Calvin resumed his relationship with Rachel but due to her daughter’s objection, Rachel and Calvin once again broke up. Not willing to let go, Calvin tried hard to please Rachel’s daughter and after six years, Calvin finally won her approval.

Recently, the trio was seen at Wan Chai helping Rachel’s 16 year-old daughter to buy a guitar. After testing and choosing the guitar, Calvin paid for it and Rachel’s daughter said, “Thank you Daddy.” Their relationship appeared to be very warm and happy together. When reporters went up to Rachel to congratulate her as the future Mrs. Poon, she just nodded and smiled sweetly. Asked if she will be making a comeback, she replied, “I have never retired and if there are people looking for me to act, I will consider. Let’s wait for a good script first.”

When Calvin was shooting in mainland China earlier, he was rumored to be having an affair with a local woman. When Rachel got wind of it, she reportedly became very furious and instantly tried to sell off the two properties that she co-owned with Calvin. However, they both denied the rumors and said, “Our relationship is getting better. Later we will have announcements for everybody.”

It is reported that wedding bells will soon be ringing for the lovers at the end of this year. At Eric Tsang’s (曾志偉) 60th birthday bash last month, Rachel and Calvin were asked if they will be getting married, in which the couple smiled without answering.