Raymond Lam Confirms Relationship with Mavis Pan Is Over 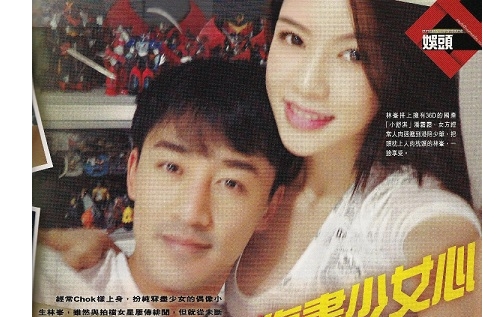 Although Raymond Lam Fung indicated that he broke up with mainland model, Mavis Pan Shuangshuang, news about their relationship continued to circulate. Last week, Next Magazine published a set of kissing photos featuring Raymond and Mavis, speculating that Raymond proposed to Mavis on Valentine’s Day and pretended that they split up. Since responding to the initial set of bed photos, Raymond has maintained his silence and noted that his past relationship with Mavis was now a memory.

Last July, Mavis posted vacation photos in the Maldives on her blog. In one of the hotel bed photos, the words “Happy H Moon” were seen. Allegedly, the person on the “honeymoon” with Mavis was not Raymond Lam.

Regarding the recent exposure of dating photos with Mavis, Raymond stated, “My emotions are stable. I try my best to not let the situation affect me. The relationship was part of past memory. My main focus is work now. Today is the first day I am filming Return to the Three Kingdoms <回到三國> and I will be working on my Cantonese music album. I have to quickly stabilize my feelings.”

Next Magazine claimed that Raymond was pretending to split up with Mavis? “I have already stated my account before. I will not respond to what other people say. This relationship took place between two people and it is not necessary to address it publicly.” (Did you see Mavis on March 14th?) “You can say whatever you want. I thank everyone for their concern. I am happy to receive so many support messages. Anyway, I will focus on my work.”

Relationship With Mavis is Over

Although Raymond stated that he will not respond to additional rumors regarding his relationship with Mavis, when asked whether he had split up with her, Raymond said, “Yes [it’s over]. Even if there are new photos revealed, I will not respond anymore.” (Are you still in contact with Mavis?) “No.”

Raymond claimed to be fully immersed in each relationship while dating. Although he may have been betrayed, he never said a bad word about Mavis in any of his interviews. Tabloids claimed that Raymond and Mavis took two vacations together: going to the Maldives in July 2010 and Bali in January 2011. Although many people were led to believe that Mavis and Raymond took a honeymoon together in the Maldives , an inside source said, “Raymond did vacation in Bali . However, he did not travel to the Maldives last July. He remained in Hong Kong for work. Apparently, another person may have spent the honeymoon with Mavis in the Maldives . You can research the facts.”

When the reporter researched Raymond’s whereabouts in July 2010, he was promoting TVB series, The Mysteries of Love <談情說案>. In addition, he had to prepare for his upcoming concert, “Come 2 Me.” He did not have time to take a vacation. Allegedly, Mavis did not tell Raymond about her Maldives vacation and thus, he did not respond about the news.

When the reporter attempted to contact Mavis, she quickly disconnected upon learning the press was on the line. Although she was originally scheduled to appear in Dorian Ho’s fashion show on March 26th, allegedly her appearance was cancelled due to recent negative publicity.

With Raymond being “betrayed,” good brother Ron Ng Cheuk Hei immediately sent him a text message. Ron said, “I have known Raymond Lam for over ten years. I know him as a righteous person who values others and treats friends well. Perhaps due to his family upbringing, he has a very high emotional quotient (EQ). I believe he will stabilize his emotions very soon.”  Ron hoped that people will give Raymond space to concentrate on work. Regarding Raymond’s relationship with Mavis, Ron declined to comment. “As a friend, I do not want to add my opinion to this incident.” Ron will quietly support Raymond. Jayne: Artists usually talk to Ming Pao to ensure that their statements are not twisted. It appears that Mavis went to the Maldives with another man, while dating Raymond? Whatever happened between Raymond and Mavis, he stated that their relationship is truly over.

This article provides good closure on the recent rumors between Raymond and Mavis. Thanks Kidd for sending it over!