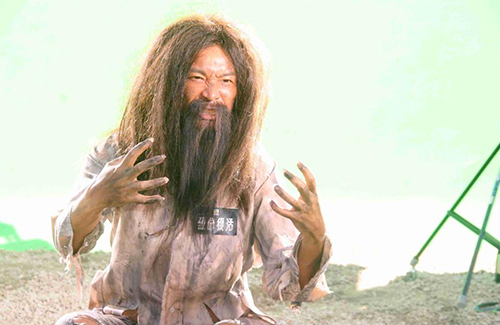 Roger Kwok (郭晉安) revisited his caveman look to film a promotional clip for the upcoming TVB anniversary drama Dead Wrong <致命復活>, which will be airing in November. The drama, produced by Lam Chi-wah (林志華), was filmed last year, and took five months to complete principal photography.

In the series, Roger plays a physician who gets abducted in Vietnam, and gets confined in a cave prison for ten years. The three-time TV King winner lost over 20 pounds for the role.

Dressing up as his character again for the promotional teaser, Roger was reminded of his experience shooting the drama last year. He said, “It was actually terrible. We spent a little over ten days shooting in a cave. It was very cold. Only about 5 to 7 Celsius. We mainly filmed at night. The makeup artists are laughing about the look now, but when we were on location, they really weren’t in the mood to laugh.”

Asking if Roger would let his two kids watch the show with him, Roger said, “This is my biggest struggle! My son has requested to see it, but his classmates didn’t like the way how I looked. They said I looked scary!”

Dead Wrong will premiere its first two episodes on Sunday, November 20. The series finale will air on December 17, a day before the 2016 TVB Anniversary Awards.