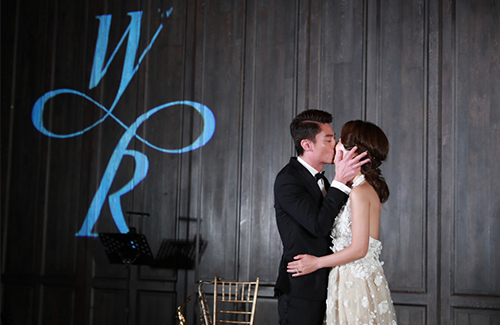 On August 2, our favorite newlyweds Ruby Lin (林心如) and Wallace Huo (霍建華) went back to their motherland in Taiwan to hold a second wedding banquet. They are following a traditional Southern Chinese wedding custom, in which the bride and her new groom visit her family’s home on the third day of marriage. The venue was decorated with flowers popularly grown in Taiwan, including pink roses, pink hydrangeas, and pink moth orchids. The theme was “Wings of Happiness”. The flower arrangements on the couple’s main table were inspired by the traditional Chinese wedding crown, a symbol to represent happiness and love. The wedding favors for the guests included a crystal music box and skincare products.

At the banquet, the groom reaffirmed his friendship and love for his bride, saying, “We’ve known each other for so long. We went from being friends who share everything with each other, to lovers, and now to being a married couple. It’s a strange feeling.” After his speech, Wallace kissed Ruby for ten long seconds, breaking the crowd into cheers. Jolin, who became close friends with Ruby after collaborating in her music video “We’re All Different, Yet the Same” <不一樣又怎樣>, accidentally slipped that Ruby and Wallace were expecting a baby in the presence of reporters.

“Best wishes to the baby’s health!” said Jolin. She laughed awkwardly after realizing her mistake. The MC then quickly corrected, “That is for their future baby, right?” Ruby laughed at the response.

Though pregnant rumors have been circulating for a while, neither Ruby nor Wallace have ever confirmed it. Nonetheless, Ruby has been seen with a protruding belly, and the first dish at their wedding banquet was called “Have a Son Soon” (早生貴子), alluding to her pregnancy.

Ruby’s father praised his son-in-law on stage, sharing that he first came to know Wallace during his 60th birthday party in Shanghai. He praised Wallace to be a polite gentleman, and hopes that the couple will continue to support each other through thick and thin. He then assured Ruby to not worry about her parents, expressing that they would be spending more of their time doing charity and going on vacation.

Her father finally added, “Ruby has always been a very clever and well-mannered child. Your family is proud of you!” Jolin Tsai and her sister Peter Ho and his wife (left); Kelly Lin and her husband (right)