In the blink of an eye, it’s been three years since Taiwanese actress, 43-year-old Ruby Lin (林心如) and 39-year-old actor Wallace Huo (霍建華) got married. Shortly afterwards, the couple welcomed their daughter, Angel, in 2017 – just half a year after their wedding. Since then, the pair has publicly expressed interest in having a second baby, and she was speculated to be pregnant with baby number two earlier. Recently, pictures of Ruby taken behind the scenes of a commercial shoot fueled the rumors once again.

The images of Ruby wearing a blue-green dress revealed her protruding belly, as she thoughtfully looked after the child actress on set while sitting on the lawn. The star was also seen subconsciously covering her stomach with her hand, and when she stood up, her assistant quickly rushed to help her up.

However, many fans refuted the pregnancy claim and blamed it on the angle. They emphasized a pregnancy is impossible as Ruby wants to take on a new movie. Others said Ruby and Wallace are gaining happy weight together since the latter was recently photographed with a belly as well. 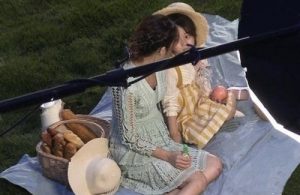 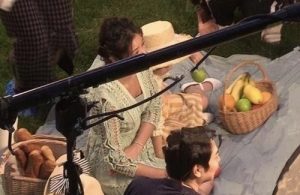