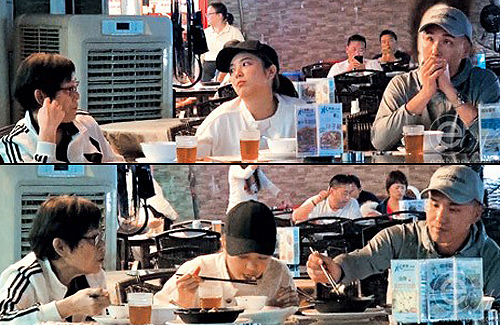 Since Ruco Chan (陳展鵬) and Phoebe Sin‘s <單文柔> romance was revealed, the paparazzi closely followed them. In March, the couple were speculated to be moving in together after being spotted on a furniture shopping spree. Although it was said Ruco’s mother approved of her son’s new girlfriend at first, the increase of negative gossip surrounding Phoebe made her change her mind.

While competing in Miss Hong Kong 2016, Phoebe was labeled a “gossip queen”, someone who likes to bootlick, start cliques, and tattle tale on others. Phoebe was also labelled a flirt. While she was still actively pursuing Ruco, it was speculated that she simultaneously went after Mr. Hong Kong winner Jackson Lai (黎振燁), and first runner-up Karl Ting (丁子朗).

When these rumors were addressed by Ruco’s mother over dinner one night, Phoebe was photographed with an awkward express. With conversation barely flowing between the two women, Phoebe frequently looked over to Ruco for help. Known for being a filial son, Ruco did not want to be caught in between the two women and chose to look at his food the entire night.