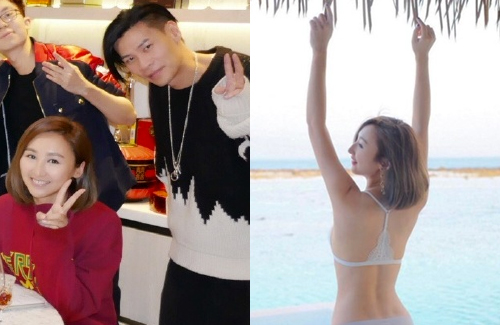 Last year, a tabloid magazine exposed that actress Samantha Ko (高海寧) and musician Tang Chi-wai (鄧智偉) have been dating for three years. The couple stayed low-key after the rumor dropped, neither confirming nor denying it. When their dating rumors were brought up during individual interviews, Samantha and Chi-wai gave ambiguous responses. On January 29, the second day of Lunar New Year, actor Bosco Wong (黃宗澤) shared a series of photos that he took at Michael Miu’s (苗僑偉) home. Bosco was there to pay Michael a New Year’s visit; among other celebrities in their circle included Michael Tse (謝天華), TVB executive Virginia Lok (樂易玲), Chi-wai, and Samantha.

Samantha’s presence caught the attention of paparazzi. In the group photo, Samantha sat in front of Chi-wai, who is known to be close friends with Bosco and Michael. The photo has raised questions about Samantha’s relationship with Chi-wai, and many netizens consider this photo as proof of their romance.

Asking about their relationship, the Commissioned Lovers <抱佣情人> actress gave only ambiguous answers. She laughed about it and said, “Michael Miu invited us to his house, so we all went there together to pay him a New Year’s visit. It’s not just us two. Many people were there.” (Were people rushing you guys to get married?) “No. Why would they do that?” (Did you bring Chi-wai to visit your parents?) “No!” Samantha visited the Maldives shortly before the Lunar New Year. She rocked a white bikini and a sexy low-cut dress, and shared the pictures on her Instagram. “It was my birthday in mid-January so my friends and I went to the Maldives to celebrate it. The dress I wore there was originally for last year’s Anniversary Gala, but because I couldn’t attend it, I never wore it. It’s so pretty there, so we took a lot of photos.”

Will Samantha be sharing any more sexy pictures? “They’re not that sexy. Everyone in the Maldives wear bathing suits and dresses. We were only there for two days, but I do have a lot more to share.” (Is the Maldives your dream wedding location?) “It was my first time there. I don’t know how to swim so I never really thought about the beach. It wasn’t until after going there when I realized how beautiful it can be. If the opportunity comes up, I’ll definitely go to more islands.”