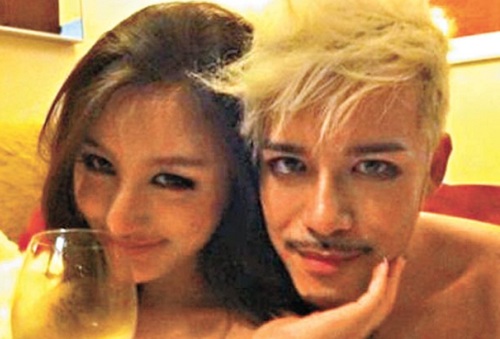 TVB actors, Sammy Shum (沈震軒) and JJ Jia (賈曉晨) have been a rumored couple since the beginning of the year. Spotted sharing meals together on multiple occasions, the pair admitted they were friends but denied being a couple. As Sammy and mainland model, Liu Yuqi (劉羽琦), generated heated sparks together, JJ hinted of heartbreak and cried daily. Did Sammy cheat on JJ?

Since the end of May, JJ Jia wrote on her Weibo that she has been suffering heartache. JJ wrote, “In recent days, I have been crying everyday. I feel terrible! I still want to be happy and find happiness.”

Asked why she was unhappy recently, JJ responded that it was due to family problems, attempting to circumvent from rumors of relationship disparity with Sammy Shum.

JJ did not shield her apparent negative impression toward Sammy’s costar, Liu Yuqi, who was rumored to be extremely flirtatious towards Sammy. JJ said, “I do not know if it is a good thing for her (Liu Yuqi) to be so forward. Each person has the right to pursue what they want and find true love.” JJ’s statement hinted that Liu Yuqi may have made bold advances towards Sammy.

Asked whether she minded Sammy Shum and Liu Yuqi’s French kissing scenes, JJ said, “It is for filming, but I cannot act in such scenes. I am traditional.”

Sammy allegedly tried to repair his relationship with JJ. However, it was uncertain the extent of success in his efforts. In an earlier Weibo blog post, Sammy wrote, “In a relationship, when one person drifts slowly away from the other, it is a sign of trouble. Even if the man repeatedly hangs in the relationship, he will only make the woman hate him more!”

On the filming set, it was rumored that Yuqi often lingered on the filming set waiting for Sammy, despite completing her scenes earlier. Sharing meals alone together, Yuqi flirted openly and said that she will consider dating Sammy. She claimed that she did not know that Sammy was already involved in a relationship.

Yuqi stated that she is currently single. “Of course Sammy Shum is good to me! We have room to develop further.” Yuqi denied that she was a third party and stole JJ Jia’s boyfriend, “He (Sammy) did not say that he has a girlfriend. I regard him as a friend. If he does have a girlfriend, I will have to reconsider!”

Sammy said that his private outings with Yuqi were only meant to enhance their “professional” performance in Lan Kwan Fong 2. Sammy said, “I did share private meals with Liu Yuqi. We are a couple in the movie, so it is necessary to communicate more. It is important to have chemistry with your costar, but be able to withdraw from these feelings when filming ends.”

Sammy continued to deny that he was dating JJ Jia. Presenting himself as an eligible bachelor, he said, “She (JJ) is a bit emotional. We are still friends.”

Jayne: Sammy and JJ’s responses indicate that they might have had a lover’s quarrel. Liu Yuqi does show her interest in Sammy strongly, whether it be genuine romantic interest or for generating publicity only.