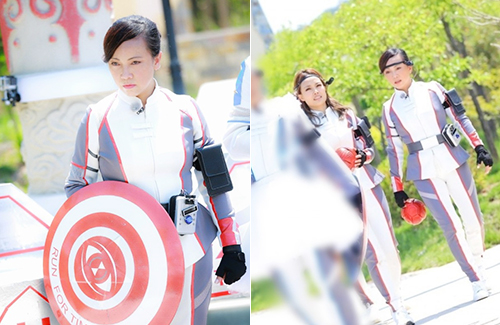 After filming the Qing Dynasty drama Beauty at War <金枝慾孽貳> in 2012, Sheren Tang (鄧萃雯) left TVB to pursue opportunities elsewhere. In recent years, the award-winning television actress has pushed her focus to Mainland China, starring in not only local mainland series, but also in variety shows. Sheren, along with Hong Kong pop star Joey Yung (容祖兒), made starring appearances in the latest episode of Run for Time <全員加速中>, a Chinese variety show adapted from the Japanese reality show Run for Money Tosochuu <Run for Money逃走中>. In the series, an ensemble of celebrities are assigned to be “escapees”, in which they are sent out to a location to escape from their hunters.

The episode, which features guest appearances by Michelle Ye (葉璇) and Matthew Ko (高鈞賢), the celebrity stars play space adventurers who land on earth for an experiment. Their task is to complete various side missions on the experimental grounds while avoiding their hunters. It was shot at the Qingdao Expo.