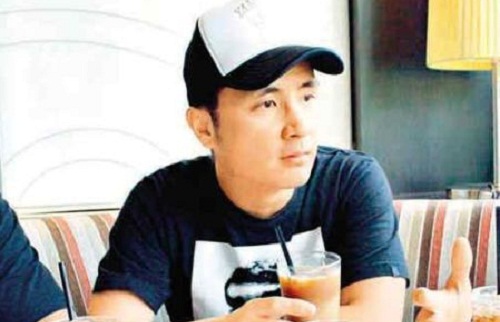 Dating fellow TVB colleague, Gregory Lee (李泳豪), for 9 years, past Miss Hong Kong winner, Shirley Yeung (楊思琦), abruptly announced to the media that she broke up with Gregory for a few months. This was a great contrast from her usual low-profile mannerism of handling romance and personal matters. The Hong Kong media revealed that Shirley has been discretely dating Beijing tycoon, Andy Ng, and possibly two months pregnant. Since “paper cannot cover fire” [her alleged baby bump would gradually show someday], Shirley reportedly used this tactic of disclosing the break-up news before others can do so.

Andy, the suspected  new lover of Shirley, tweeted his messages of love across popular Chinese microblogging site, Weibo, very early on. Andy even went as far as to mention that Shirley has a “much bigger mission” at stake, seemingly hinting that Shirley may be pregnant with “a bun in the oven.”

Ever since Shirley Yeung ruthlessly dumped Gregory Lee, he buried himself in car racing to numb his heartbreak and  resolved to work harder. Last weekend, Gregory asked two of his good friends along to test-drive cars, in preparation for the upcoming car racing/drifting competition in August. After test-driving the cars earlier, Gregory’s friends took him pancake snacking. Throughout the entire journey, he was seen furrowing his eyebrows and in deep thought.

In the interview, Gregory appeared troubled. When mentioned about his 9 years relationship with Shirley, he heaved a sigh and seemed protective of Shirley, “Whatever happens, I will give her my blessings. She is also suffering under the intense scrutiny of the media.” (But will it be awkward if you meet her again?) Gregory said, “No, we are still friends.”

Earlier, Gregory and Shirley’s relationship had progressed to the stage where wedding plans were in discussion.  Suddenly, the relationship was pronounced “dead” by one party. Gregory had a hard time absorbing and accepting it, professing that he could not sleep or have the appetite to eat. “Just one month ago, there were talks of marrying, choosing an auspicious date, and plans of holding our wedding abroad. Now, there is no need for all these procedures anymore.”

Speaking of his agony, Gregory clenched his fist and withheld his tears, he professed that he did not know suspected third party, Andy. The dedicated lovelorn Gregory was still hung up on hopes of a reconciliation with Shirley, “To tell the truth, I haven’t been able to put down my feelings to-date. Regarding future matters, I would leave them to God to arrange.”

The abrupt ending of a 9-year romance within one night is of course, hard to bear hence friends of Gregory were afraid that he might do something rash and thus has been taking turns to accompany him and lend a listening ear. Gregory said, “Everyone was afraid that I would think too much so they have been accompanying me, stuffing my schedule until it was full, even to the extent of confiscating my car keys, refusing to let me drive for fear of any accidents. Sometimes when I reach home late, my family would call me.” (Your parents were very agitated?) Gregory said, “I did ask them to calm down.”

Friends consoled 31-year-old Gregory that he still has a long future in front of him and hoped he would recover in due time. Gregory said, “I will definitely work harder! Actually, I have been actively working hard in the past too but people only saw the fruit of the labor and not the hard work involved. My lack of fame has caused a lot of matters. The pressure had always been there but I do not wish to be weighed down by others’ perception of who I am anymore.”

The Winner, Andy, Shows Off His Victory on Weibo

Gregory’s part-time occupation as a racing coach raked in a monthly earning of $5,000 (HKD). Due to additional income from teaching horseback riding and acting in TVB roles, his total monthly salary was $30,000 (HKD). Compared to a normal worker, this salary was without a doubt, considered optimistic. However, to support a wife, Gregory would really have to work a little harder.

In his thirties, Andy was a rich tycoon in mainland in comparison. Allegedly, Andy was Shirley’s secondary school mate, who had studied in Beijing in the past. In 2008, Shirley attended the Beijing Olympics and bumped into Andy again. Andy immediately asked Shirley for her phone number and started his pursuit.

An insider disclosed, “Andy knew that Shirley already had a boyfriend but he still continued to woo her. His methods were brilliant. He specialized in adopting one’s likes. Furthermore, he knew how to use the mother-in-law tactic, often fawning over Shirley’s mother with gifts.  He was even smart enough to ‘follow/lock in’ on Gregory in Weibo, grasping the every action of his rival in love. In the beginning, Shirley only considered him as a friend but gradually began to overstep the boundary.”

In fact, in January 2011, Andy and Shirley have been exchanging love messages across Weibo. Although Andy has been leaving messages on Weibo, assuming an identity as Shirley’s fan, there were minor hints here and there, showing that there was more that meets the eye in their relationship.

On the day that Shirley announced her break-up with Gregory in a high-profile manner, Andy wrote on his Weibo page, “This has been a remarkably memorable month. Eleven years of feelings finally bore fruit; I will do my very best to protect her and love her. I believe that I can give her happiness. This promise will be forever.”

In the midst of flying rumors, Shirley’s newfound lover, Andy, asked her not to eat instant noodles, for fear that it will spoil her health. In a Weibo message, Andy wrote, “You still have a very important mission at stake!” Perhaps there was “no smoke without fire” [Chinese proverb that there must be some truth to these rumors].

Shirley and Andy’s Exchange of Love Across Weibo

Signs of Shirley’s new lover, Andy, (Andy’s Weibo link: http://weibo.cn/dpool/ttt/home.php?uid=1928742860&d=1928742860), disguising himself behind the Weibo ID of @cthk118, showing warmth and concerns of Shirley on her Weibo page, indicating that something was in the air.

Sexy Shirley uploaded a self-photo of her low-cut gown, thereby showing off her “career line” (aka cleavage). Andy, @cthk118,  replied, “The clothes that I detest the most!” indicating signs of jealousy.

Shirley praised her mother’s stir-fried oysters with ginger and spring onion as superb. Andy, @cthk118, replied, “Waited for so long but have not had the chance to eat. Will definitely try it on my next trip down to Hong Kong! Not only must I try, I should learn to cook it!” The message proved that he must be someone with close relations to the Yeung family in order to have Shirley’s mother whipping up dishes for him.

Shirley, who was banned from eating instant noodles, discovered a cute “bear shaped food” at a supermarket in the evening. Andy, @cthk118, replied, “Buy it home. Not a bad snack option, I want to try that too!”

At midnight, Shirley ate instant noodles and sausages for supper. Andy, @cthk118, replied, “Buy some stuff to store in the fridge, those type that are microwavable and can be eaten once heated. Last time it’s because you have no choice but to eat cup noodles. Now there is your mom to cook for you! Cup noodles have been found to contain cancer-causing plastic additives; it will affect one’s health! You still have a very important mission! Bear in mind!” Ah K: The article above was translated based on my best interpretation of it. While I try my best to translate, it shouldn’t be relied on for 100% accuracy and in no way did I fabricate all these as they were stated as per the original Chinese news report above, although some words may be warped in it’s meaning after translation.

This article was translated by Ah K for JayneStars.com.