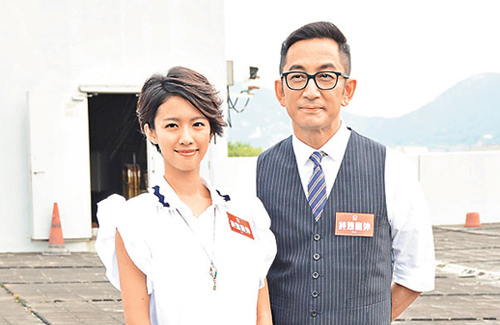 After winning the 2013 Miss Hong Kong pageant as first runner-up, 24-year-old Sisley Choi (蔡思貝) has been fortunate to be granted many opportunities at TVB. Heavily promoted by TVB, Sisley is on a steady rise to the top and will be starring in many upcoming dramas. After completing Speed of Life <當鐵馬遇上戰車> and Fashion War <潮流教主>, she began filming Purely An Accident <純熟意外> with Lawrence Ng (吳啟華).

Recently, Sisley and Lawrence were filming a simple outdoor scene in a car. Sisley was in the driver seat while Lawrence was in the passenger seat. Since she had to drive and remember her lines at the same time, Sisley was distracted and had five outtakes, much to the dismay of Lawrence. Although filming of the scene was slated to be short and quick, the actors did not conclude filming of the scene until 45 minutes later.

Lawrence’s expression appeared noticeably grim. Upon completion of the film, Lawrence and Sisley immediately got out of the car. With zero interaction and communication, the actors went their separate ways with Lawrence leaving in his personal vehicle while Sisley hopped into the company car.

While filming, a group of tourists exited a nearby hotel and saw the set and filming crew. Upon seeing Lawrence, many eager fans took out their cameras for photos and did not seem to recognize Sisley. Despite earlier reports claiming that Sisley ousted Selena Li (李施嬅) to be the female lead in the series, it appears that the young actress still lacks experience and public recognition.