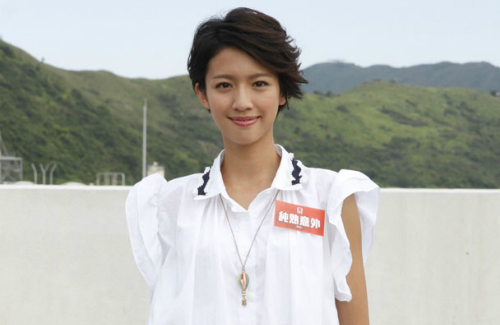 Filming for TVB’s new modern series, Purely an Accident <純熟意外>, has been well underway. However, the action-packed drama does not lack the danger and thrill that require the participation of stuntmen. Lawrence Ng (吳啟華), Sisley Choi (蔡思貝), and Joel Chan (陳山聰) earlier filmed an intense rooftop scene, in which Lawrence and Sisley rushed to save Joel from falling off a building.

Still quite new in the field of acting, Sisley expressed her excitement in shooting dangerous scenes, such as an upcoming scene that speaks of her being trapped underwater. Since such situations rarely occur in real life, the rookie actress is looking forward to the accompanying adrenaline rush. She even hoped to be in Joel’s place in order to experience what it was like to be hung from a building.

Lawrence, who was standing beside Sisley, disagreed and explained situations that involve danger could easily go wrong. He remarked, “You think it’s fun? It’s tough! Being hung off a building is very dangerous! They wouldn’t actually have us do it anyway; that’s what stuntmen are for. But even then, things can go wrong! Actors shouldn’t take risks if it’s not necessary. The producer wouldn’t want us to take risks either.”

Originally excited for her upcoming scene, Sisley began to think otherwise. Lawrence then added, “You really have to be careful if you’re filming underwater. It’s even scarier if it’s in the ocean! There may be undercurrents! I once filmed a scene in which I tried swimming back up onto a boat, but failed to do so. The more I swam, the farther away I drifted. It was pretty scary!”

Hearing Lawrence’s words, Sisley exclaimed, “Now I’m really scared because you won’t stop talking about the things that can go wrong. You have to save me [if it happens]!” Lawrence jokingly replied, “I’ll throw you a lifesaver!”

On the other hand, Joel shared he has a fear of heights and part of his scene was completed by a stuntman. In the series, he portrays a DJ who is later poisoned and suffers from a gruff voice. Speaking of how he earlier formed a running team called “Crazy Runner” with some good friends, Joel explained he hopes it will provoke those around him to engage in more charity events.