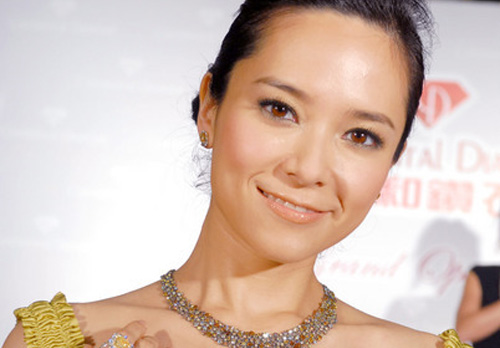 Sonija Kwok (郭羨妮) and mainland action choreographer, Zhu Shaojie (朱少杰), got married in Guam in October 2011. Recently, rumors circulated that Sonija was pregnant. The reporter called Sonija yesterday to confirm the news. In a text message reply, Sonija indicated that she did not wish to reveal too much information at this stage.

It was understood that Sonija did not pass the first trimester of her pregnancy yet, while other rumors claimed that she was already 4 months pregnant!  Regarding Sonija’s pregnancy rumors, TVB executive, Virginia Lok (樂易玲) replied, “I will privately congratulate her when she passed her first trimester!”

Filming a promotional clip for series yesterday, Michael Miu (苗僑偉) noted that he noticed Sonija’s belly bulging. “I teased her about her belly protrusion, upon which she declared that she was pregnant!”

Jayne: It appears that Sonija has already told her friends about the pregnancy. Congratulations!