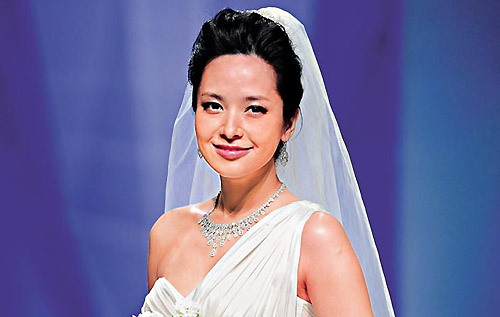 Since Sonija Kwok (郭羨妮) met mainland action choreographer, Zhu Xiaojie (朱少杰), the pair fell passionately in love and decided to spend the rest of their lives together. At an earlier Beijing fashion show, Sonija announced that the couple would get married at the end of the year. It was known that the wedding dress will be designed by Dorian Ho (何國鉦). However, it appeared that Sonija’s wedding plans may have been altered.

In a telephone interview, Dorian Ho noted that Sonija has not appeared for body measurements and that the wedding gown has not been designed yet. Dorian noted that it would be very difficult to complete the gown before the end of the year. “Sonija has not discussed the wedding gown details with me yet. She said we will talk about it later. She is very low-key. I think she has her own plans. (Will the wedding take place next year?) “We will not have enough time to complete it this year. I can work with next next year.”

Since Sonija announced her marriage and and revealed her happiness, many netizens teased her. No wonder she had to be so low-key in the wedding planning. As TVB’s contracted artists, Sonija refused their offer for a grand wedding ceremony in Beijing. She decided to hold her wedding on a small island to avoid the media. She chose a wedding planning service that catered to foreigners and will only invite her closest family and friends to the wedding. Taking into account that her fiance’s relatives and friends lived in Beijing, Sonija will have have a wedding banquet in Beijing later.

Regarding rumors that TVB had proposed that Sonija hold her wedding in Beijing, Deputy Director of External Affairs, Tsang Sing Ming (曾醒明) was uncertain over the matter. However, he will respect Sonija’s individual wishes. Jayne: Would not be surprised if this turns out to be a ploy to distract the media and Sonija holds wedding ceremony quickly!