Sonija Kwok to Return to Work in September 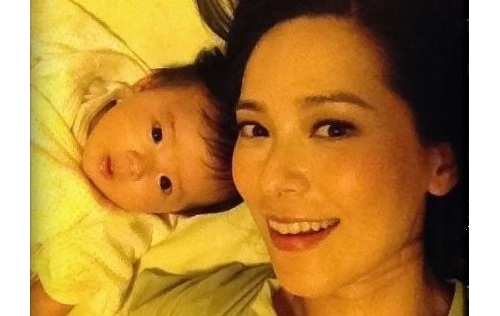 Sonija Kwok (郭羨妮) delivered a baby girl, Kylie, earlier this May. Since then, Sonija has taken a break from work and kept herself occupied with Kylie while her husband, Zhu Shaojie, 朱少杰, was filming in the Mainland. During a telephone interview, a very happy Sonija expressed that 2-month old Kylie has kept her very busy, especially since many friends such as Charmaine Sheh (佘詩曼) would stop by for a visit.

Sonija did not feel that being a parent is difficult. She explained, “My mom was here to help me out in the beginning. The baby didn’t wean off her milk at night yet, so I still take care of her at night. She is starting to giggle now and she’s getting really chubby! She weighed about 10 pounds at the last check-up!”

In preparation for getting back into acting, Sonija focused on getting her pre-baby figure back, dropping 33 pounds in the past 2 months! She said, “I weighed 148 pounds after the baby. But I’ve been eating very healthy and dropped back to 115 pounds.” When asked if she and her husband were interested in expanding their family, Sonija was quick to say, “Of course he wants to! I want to as well, but the doctor advised us to wait about six months, so perhaps at the end of the year? It’s best if a child can have a playmate!”

Fans of Sonija will be able to see her on the television again come September, in which she will star alongside Sunny Chan (陳錦鴻) and Raymond Wong (黃浩然) in a TVB period drama. Sonija said that her husband encouraged her to go back to work and she is looking forward to getting back into acting. She did not especially ask the cast and crew to accommodate to her schedule now that she has a baby. Besides, since Sunny and Raymond are both fathers themselves, there will surely be lots of discussion about parenting!

48 comments to Sonija Kwok to Return to Work in September