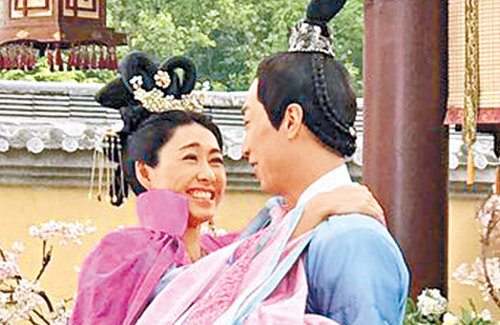 Filming in Hengdian for Deep in the Realm of Conscience <宮心計2深宮計>, Steven Ma (馬浚偉) recently fell ill with bronchitis due to the poor weather conditions.

Along with Nancy Wu (胡定欣), Chrissie Chau (周秀娜), Alice Chan (陳煒), and the rest of the cast, Steven was scheduled to stay in Hengdian for a short period of time in order to film their outdoor scenes. Unfortunately, the weather in Mainland China was unpredictable and often switched between very hot or very cold.

Not wanting to delay filming, Steven visited a doctor immediately. He disclosed, “The temperature differences are huge. My [bronchitis] was acting up again, so I went to see a doctor to get some Chinese medicine. I also bought an asthma spray, I should be okay!”

On the filming conditions in Hengdian, Steven exclaimed, “It’s very cold here today! When it’s hot, it’s usually 34 to 35 degrees, but it’s only 10 degrees today. Everyone was so cold that we had to huddle!”

Thankfully, Steven had his female cast who took good care of him. As well, Steven revealed that his old friend, Michelle Ye (葉璇) rented him an apartment in Hengdian so he had a place to stay. Upon hearing that Steven was feeling unwell, dozens of his fans also visited him on set.

Touched by his fans’ kindness, Steven expressed, “There were around 30 fans who took the plane and train to get here – they’re so thoughtful. They offered me encouraging words. Every time I come to Hengdian, they actually coordinate a time to come visit. I’m happy that they didn’t buy me presents this time but instead, brought drinks and food for the workers – this makes me even happier.”

TAGS: Deep in the Realm of Conscience, Steven Ma