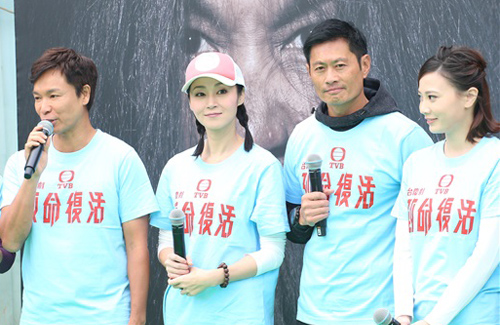 TVB’s last anniversary drama for the year, Dead Wrong <致命復活>, will be having a two-episode premiere this Sunday, November 20. Produced by Lam Chi-wah (林志華), the suspense drama stars Roger Kwok (郭晉安) as a castaway who returns home after a ten year disappearance. He learns that his wife had remarried, and that some of the closest people he knew played a part in his abduction ten years ago. Dead Wrong costars Joey Meng (萬綺雯), Kenny Wong (黃德斌), Vincent Wong (王浩信), and Rebecca Zhu (朱晨麗).

The final episode will air on December 17, one day before the 2016 TVB Anniversary Awards. In 2006, senior business consultant Vincent Wai (Roger Kwok) and his apprentice Max Hong (Vincent Wong) get taken hostage during a business trip to Vietnam. While Max manages to escape imprisonment, Vincent stays confined in a deserted island for a decade.

Ten years later, Vincent is found and taken back to Hong Kong, where he learns that he was legally declared dead. Struggling to understand the reasons behind his abduction, Vincent visits Vietnam again to probe into the matter, bringing along his wife Cathy Yuen (Joey Meng) and his good friend Lam Ho-yan (Kenny Wong). Local police, however, constantly obstructs their investigation, throwing the trio into dangerous situations.

Upon their return to Hong Kong, Vincent learns that Cathy had remarried during his disappearance, and that her current husband is Ho-yan. Broken-hearted, Vincent chooses to leave Cathy and their son, and plunges his own life into his work. With Max’s support, Vincent finds his place at work again, and even gets involved in an ambiguous relationship with his boss, Queenie Yip (Rebecca Zhu).

But Vincent still feels lost. Recalling his disappearance with indignation, he launches another investigation. The unexpected clues he discovers lead him on a journey of vengeance.