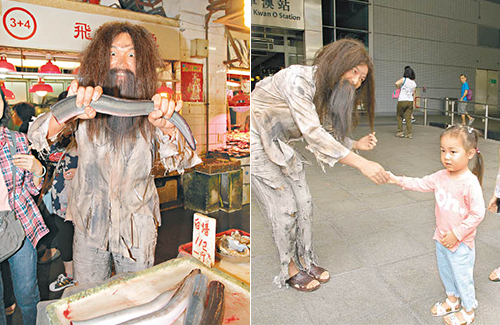 Roger Kwok (郭晉安) could well be on his way to break a TV King record.

The 52-year-old actor, who is back in the TV King game with his anniversary drama Dead Wrong <致命復活>, surprised people in a Tseung Kwan O wet market while dressed up as his character. The show had a two-episode premiere on Sunday, November 20.

Dead Wrong, produced by Lam Chi-wah (林志華), stars Roger as a business consultant who was abducted and trapped in a Vietnamese cell for a decade. Upon his escape and return to Hong Kong, he discovers more secrets about his imprisonment, and seeks vengeance.

To promote the series, the three-time TV King dressed up as his character to prowl the streets. Despite having to wear a thick wig and beard, Roger said makeup only took about one hour of his time. “Everyone’s used to this look now. I don’t need anyone’s help either. I can put this wig on myself!”

Roger expressed his excitement about surprising passerbys in the streets. Acknowledging his caveman look with a laugh, Roger said, “I wonder what happens if no one recognizes me? Will they jump on me?”

Two hours later, Roger was dropped off to a Tseung Kwan O wet market. It didn’t take long before the passerbys recognized the homeless man to be Roger. A butcher offered the actor some fresh char siu; Roger got into character and said, “I haven’t eaten in so long!”

A dried seafood store owner joked along, “You’ve been in trapped in Vietnam for so long! Have some food!”

Roger also stopped a taxi and greeted the driver, who immediately recognized him. Asking the driver if he would help bring a homeless man home, he said, “I would. I’ll treat it as charity!” he said. Roger joked, “Take me to Shenzhen!”

After about ten minutes of mingling in the market—in turn attracting nearly a hundred people—Roger stopped by the bus stop and the MTR, asking people if he could cut in line. The commuters avoided him at first, but then quickly recognized the man to be Roger, and asked for photos.

Dead Wrong, which premiered on Sunday, averaged 21.1 points, with over 1.36 million live viewers tuning in.