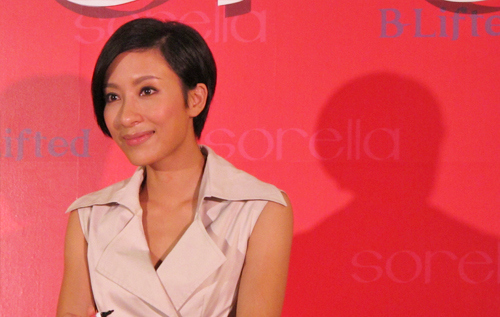 Tavia Yeung (杨怡) endorses lingerie for a six figure sum and commend that men who accompanies her to shop for lingerie are able to win her affection. Tavia also expressed that Steven Ma (马浚伟) had ever bought lingerie as a gift to her! This is Tavia’s first time endorsing a lingerie brand. She had apparently been in talks with the lingerie company for more than a year now before finally meeting a consensus on the endorsement deal.

Tavia accepted an interview at Nex shopping mall, self-professing to be a conservative person thus of course having her misgivings and hesitating about the endorsement offer earlier on.

Tavia expressed, “Previously, to me, lingerie should only be hidden at home and wore and seen by myself. If I bought something sexy, I would keep it well after looking and didn’t dare to wear it.”

Tavia who didn’t gave much emphasis to lingerie in the past, felt that this endorsement was an iconic project as it marked her first step in surpassing herself. Furthermore, as this was also the first time the lingerie company, Sorella, was finding a spokesperson for their brand, Tavia felt that they were especially fated with each other.

Tavia said that friends and relatives around her initially thought that her endorsement of lingerie would be extremely provocative. However, upon watching the Sorella advertisement she filmed, they felt that it was very beautiful, very fashionable and modern and were thus acceptive to it. Not intentionally showing off her sexiness

It was such a pity though that Tavia did not show any alluring “career line” (cleavage) at the events yesterday. Tavia laughed and said that there was no need to show off her lingerie as it could be seen that her confidence had already shone through.

Asked about how wide her measurements were, Tavia professed that choosing to shoot a lingerie advertisement was not meant to showcase her sexy side but rather to convey the message that a good lingerie could deliver confidence and knowledge to protect one’s body.

As for her acting job, she would go according to how the plot will be filmed but would try her best not to be overly sexy and do the necessary precautions to avoid any accidental exposure.

Tavia expressed seriously that she isn’t a person who would deliberately show off her sexy side.

Being curious about the remuneration fee received for this one year endorsement, Xinmsn [a entertainment web portal and the interviewer of this interview] asked Tavia about it. In reply to this, Tavia smiled, thanked the boss of Sorella lingerie and said, “I am extremely satisfied with the remuneration received. Hope that we will continue to have the opportunities to work together again in the future.”

After which, the lingerie company, Sorella, was willing to reveal that the endorsement fee was a six figure sum dominated in Singapore dollars.

Tavia shared with the media that her first time buying lingerie was with her mom, who had brought her there. At that time, she would pick those lingerie that were very conservative and wouldn’t protrude her chest, for example, a sports bra, as she felt embarrassed and didn’t wish to let guys see it.

However, upon growing up, she realized the importance of a lingerie and that lingerie should be chosen based on something that suits yourself. Tavia revealed that apart from consulting an expert for opinions, she would also shop for lingerie with the friends around her.

Tavia even urged those female audience present at the venue to try asking their boyfriend to shop for lingerie together as men usually have a keen sense of taste.

Tavia explained, “Men can bring us greater confidence. If a lingerie is worn well, he would sing your praises and you would be even more confident.” [Caption: Fans arranged a birthday surprise for Tavia, Tavia happily expressed that this marked her first time celebrating her birthday in Singapore.]

As for men who might feel awkward being at the venue, Tavia smiled and extended an invitation to the male audience to accompany her to walk around the lingerie shop together. Her fans then screamed hysterically upon hearing this.

Tavia felt that since women do not mind accompanying men to select their men’s underwear then men shouldn’t feel embarrassed (shopping with women for their lingerie) too. Tavia even advised the male audience that sometimes their wives’ lingerie were meant for their eyes thus if they saw that their wives’ lingerie was already old and worn out, they could buy and give them new ones.

Hearing Tavia dishing out tips like an expert, it was believed that those types of men were especially good at winning Tavia’s affection. Then in that case, is being able to shop lingerie with her, one of her criteria when looking for a boyfriend?

Tavia agreed and said, “That would be nice and considerate. In knowing what we women need, it could pull our relationship much closer.” Although Tavia had been rumored with TVB male actor Chris Lai (黎诺懿) in recent days, she expressed that she hasn’t found “someone” who was willing to accompany her to walk inside a lingerie shop.

However, Tavia revealed that she had ever received a lingerie given by a male and that person was none other than TVB colleague Steven Ma (马浚伟)!

Tavia went on to describe that at that time, Steven Ma went to Canada for work and asked her what present would she like to receive. Tavia then replied to Steven  to buy anything as she would still like it, even a hand moisturizing cream would also do. In the end, when Steven went into the shop, he chose a lingerie and a leopard print design lingerie at that!

When Steven gave her the lingerie, he said, “I don’t know your measurements and I don’t know whether you like it or not but you can go back and wear it for someone who likes you to see you in it.”

As for the fate of that special present, Tavia laughed and  disclosed, “After trying it, I placed it at the bottom of my closet.”

However, Tavia was still very happy as that was her first time receiving lingerie from a male and highly praised Steven for being a good role model to men out there.

Tavia had ever endorsed a breast enhancement product which had seen results but she didn’t wish to reveal the measurements of her current cup size and emphasized that health is her main objective when endorsing such a product.

Tavia will be proceeding over to Malaysia to promote for Sorella before flying back to Hong Kong.