However, unexpectedly, spoilers of future episodes were discovered to have been leaked onto a Mainland China website.

TVB senior management staff had already been alerted of this incident and have expressed that they will do a thorough investigation to get to the bottom of this matter.

TVB professed that they will do a thorough investigation

The producer behind “Men With No Shadows”, Poon Ka-Tak (潘嘉德), professed that TVB had already launched an investigation towards all the relevant parties involved.

It was known that TVB’s normal practice was to hand the tape containing the episodes directly over to their worldwide television operating arm, TVBI.

TVBI would then disseminate it overseas and request the other parties to broadcast the episodes synchronously with Hong Kong or even later. However, it was inevitable to have some loopholes in the process.

TVB’s External Affairs’ Deputy Director, Tsang Sing Ming (曾醒明), did not rule out the possibility that sometimes out of convenience, TVB might hand over the tape earlier than usual to TVBI.

However, Tsang Sing Ming also pointed out that TVB and TVBI belonged to the same conglomerate and have worked exceptionally well together in their many years of co-operations, rarely making any mistakes.

Nonetheless, to prevent history from repeating itself and to hamper any more of such leakage from happening on other blockbuster dramas, the company would still conduct a dynamic investigation.

When Tavia Yeung, the female main lead of “Men With No Shadows”, was asked about this matter, she revealed that quite a few of her Mainland fans had told her that they have seen the episodes that have yet to be broadcasted in Hong Kong.

Tavia continued, “We will more or less be affected but such matters are inevitable. Even if there is a thorough investigation, they might not be able to track the source of it. We can just hope that the Hong Kong audiences would support us and watch the series on time.” [Caption: While shooting a promotional clip for his drama last night, Bobby Au-Yeung had plenty of fun playing around with his ex co-star Florence Kwok (郭少芸)]

In other news, Bobby Au-Yeung, the other male main lead of “Men With No Shadows”, was at TVB Pay Vision last night to promote another classic drama which he had previously participated in. As for “Men” being accused of plagiarism, Bobby expressed that he sincerely urged all the audiences to watch another ten episodes patiently before making any verdict. 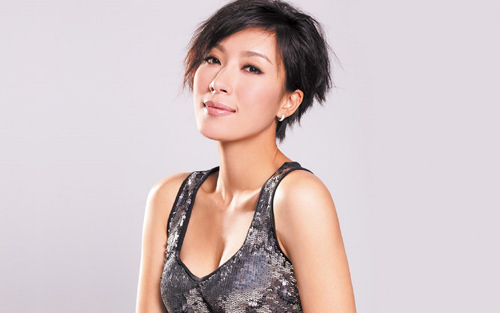