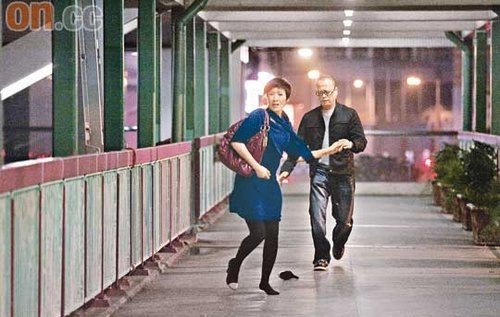 Tavia Yeung Yi, Raymond Lam Fung, and Bobby Au Yeung filmed a scene for “An Uninvited Date”(不速之約) yesterday. In the series, married couple, Tavia and Bobby had an argument and Tavia sought solace in Raymond.

While walking on the pedestrian skywalk, Tavia’s high heels fell off. Bobby knelt down to pick up the high heels and Raymond helped Tavia put the shoes on! Tavia said, “I felt like Cinderella! Raymond is idolized by millions of female fans. It is an honor to have him put my shoe on! Even more honorable is having acclaimed veteran, Bobby, pick up my shoe for me!”

Raymond joked and said he did not smell any odd odors while putting on Tavia’s shoe. Was Raymond afraid that this scene will arouse fans’ jealousy? “My most frequent co-star at TVB is Tavia, whom I have known for the longest time.”

Will Tavia be sharing a kissing scene with Bobby? Bobby said, “It’s best if we don’t! When my face is flattened during kissing, I don’t look good! It’s very embarrassing to film this type of scene! If you kiss stiffly, the audience will complain the scene looks too fake. If you kiss too passionately, people will complain that you are a pervert!” Jayne: Looking forward to the cast’s chemistry in “An Uninvited Date.” Bobby has amazing chemistry with most of his female co-stars. Tavia had an awesome year last year and in 2010, looking forward to more breakthroughs in her performance.